WASHINGTON (Reuters) – Peaceful participants at a rally in a small North Carolina city to turn out the vote ahead of Tuesday’s U.S. presidential election were pepper-sprayed by law enforcement officials on Saturday, according to videos broadcast online and witnesses.

Videos showed officers firing pepper spray into the crowd in Graham, a city of about 15,000 located about 40 miles from Raleigh-Durham. North Carolina is a crucial battleground state in the Nov. 3 contest between Republican President Donald Trump and Democratic nominee Joe Biden.

The Graham Police Department said officers took action after participants at the rally failed to obey warnings to disperse.

The state’s Democratic governor described the incident as “unacceptable.”

Shon Green, a 28-year-old activist who helped organize the protest, along with the Reverend Greg Drumwright, a Black social justice organizer, said police abruptly ordered an end to a peaceful rally, which had been due to end at a polling station.

“There was no explanation or anything,” Green said in a telephone interview. “They started pulling out their guns and grabbing their weapons. Then they started spraying people.”

Green said he was sprayed in the face and later slammed to the ground before being briefly taken into custody.

The Graham Police Department, in a press release, said officers directed pepper spray into the ground after rally participants failed to follow a command to stop blocking a road.

“As a result of actions that occurred within the rally, on courthouse grounds, the assembly reached a level of conduct that led to the rally being deemed unsafe and unlawful by unified command,” the police statement said. Following warnings that force would be used if people did not disperse after 5 minutes, the department said officers used the pepper spray after several people still remained.

The Burlington Times-News newspaper said one of its reporters was among those pepper-sprayed and said they did not hear any warning before the police action.

Protester Amy Cooper, 31, said that youngsters and the elderly were among those attacked.

“I saw it hit a child,” she said of the pepper spray. “She got it straight in the mouth and she vomited everywhere.”

Dreama Caldwell, who is a candidate for Alamance County commissioner, told Reuters that officers were to blame.

“The only violence that happened today was from the police,” she said.

In a statement posted on Twitter, Governor Roy Cooper said that peaceful demonstrators “should be able to have their voices heard and voter intimidation in any form cannot be tolerated.” 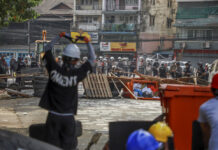 Nearly 40 killed in violent day of protests against Myanmar coup

Car crash, rifts, and scandal: A tough year for the British...