BEIRUT: As thousands of devout Muslims flock to Islam’s holiest sites in Saudi Arabia for the annual haj pilgrimage this week, scientists warn the sacred rite is under threat due to deadly rising heat.

The risk of pilgrims suffering life-threatening heatstroke could rise five-fold with global warming of 1.5°C above pre-industrial times, found the study in the journal Environmental Research Letters.

With an increase of 2°C  the less ambitious goal of the 2015 Paris Agreement — the probability becomes 10 times higher, said Climate Analytics, a Berlin-based think-tank.

“The region is already susceptible to dangerous heat levels. We found that even in the best-case scenario, where temperatures only go up by 1.5°C, pilgrims would still be under threat,” said Fahad Saeed, lead author of the study.

“It will compromise the very essence of this religion,” Saeed, regional lead scientist for Climate Analytics, told the Thomson Reuters Foundation.

The world has already heated up by about 1.2°C and is currently on track for warming of about 3°C this century as emissions continue to rise.

The haj, a once-in-a-lifetime duty for every able-bodied Muslim who can afford it, involves several outdoor activities, including praying outside and walking from one religious site to another during the day.

The risk of heatstroke stems not just from rising temperatures, but from more humidity — which prevents sweat from evaporating as quickly, making it harder to cool down.

To guard against the coronavirus, only 60,000 pilgrims are visiting the main sites from July 17 to 22 this year, in temperatures of about 36° to 43°C.

Climate Analytics found that July, August, September, and October will have the deadliest combination of heat and humidity — months during which the haj, which follows the Islamic lunar calendar, is set to fall for the next decade.

The Saudi General Authority of Meteorology and Environmental Protection did not immediately respond to a request for comment.

Saudi authorities are tackling the heat threat, with a 2016 National Haj Extreme Heat Strategy pledging air conditioning and fans in all indoor places and adequate water, as heat illnesses made up 24% of hospital admissions during 2015’s haj.

After allowing only 10,000 pilgrims to attend last year, the haj has expanded this year but only to citizens and residents, aged 18 to 65, who have been fully vaccinated or have recovered from the virus and who do not suffer from chronic diseases.

The ministry of health announced it had provided misting fans across religious sites and a nearby hospital would be equipped with a 24-hour heat exhaustion unit.

Limiting numbers to decrease the risk of spreading Covid-19 has also barred those most at risk of heatstroke, while fewer pilgrims mean cooling units can work more effectively.

“There are lower numbers this year but in normal years the haj brings two million people to a confined place. The risk would be higher,” said Saeed.

The study’s authors said Muslim countries should consider more actively working to curb climate-changing emissions under the Paris Agreement “in order to avoid profound risks for one of the central elements of their faith”.

“Climate action could save this heritage,” Saeed said.

India coronavirus cases near one million, driven by surge in rural...

Trump is no longer a COVID-19 ‘transmission risk’ – White House... 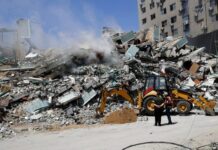