Hurricane Harvey is just one of several recent weather disasters marked by shocking staying power, punishing whole regions for days or weeks on end — or even longer.

Others include a massive heat wave over Russia and flooding in Pakistan in 2010, the Texas drought of 2011, the California drought that began around the same time and continued through this year, and the flooding last year in Texas’s neighbor to the east, Louisiana.

When Harvey stalled off the Texas coast because two high-pressure atmospheric masses — bookends made out of air — squeezed it in place, there weren’t any high-level currents to help steer it away.

Sluggishness in storms is a big deal, particularly if they are increasing in frequency.

Harvey’s flood waters started dropping across much of the Houston area on Wednesday and forecasters had downgraded it to a tropical depression, but it still had lots of rain and potential damage to spread on the Gulf Coast. The confirmed death toll climbed to at least 31, including six family members — four of them children — whose bodies were pulled Wednesday from a van that had been swept off a Houston bridge into a bayou.

As Harvey stays put, it functions as a fire hose that sucks warm water from the Gulf of Mexico and the atmosphere and dumps it inland.

Just to be clear, climate change itself is no longer up for debate — both in the scientific community and among national governments (with few notable exceptions). Understanding it is relatively simple. Global average temperatures are rising. There is at least 4 percent more water vapor in the air than 70 years ago. Ice sheets are melting. Seas are swelling. These phenomena are the direct effects of warming, and humans are causing it.

What experts don’t agree on, however, is whether — or how much — man-made climate change is responsible for this meteorological stickiness that has kept Harvey over southern Texas.

Instead, the experts are asking how huge, “dynamic” atmospheric systems may be changing, at least indirectly, because of humanity’s prodigious greenhouse gas pollution. So, a better question might be, “Does humanity have anything to do with summertime Northern Hemisphere storms that are prevented from moving off because of changes in the jet stream?” The answer is there is not enough evidence yet.

With Houston still under siege and the hurricane season still churning, the thought of more case studies is the last thing anybody wants to consider. And yet, just as it took decades to prove climate change, time and more studies will likely show whether humans have gone beyond global warming, and in fact changed which way the wind blows.

How an Argentine family quarantines inside a sailboat near Rio de... Parts of China on high alert as Covid comes back

Fearing virus, some Chinese in Russia self-isolate, many go home 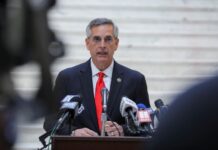