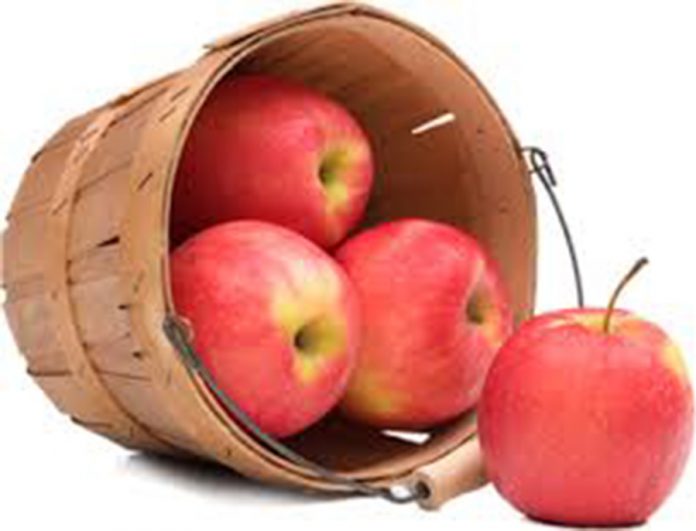 Antioxidants are disease-fighting compounds. Scientists believe these compounds help prevent and repair oxidation damage that happens during normal cell activity. Apples are also full of a fibre called pectin – a medium-sized apple contains about 4 grams of fibre. Pectin is classed as a soluble, fermentable and viscous fibre, a combination that gives it a huge list of health benefits.

Apples are one of the foods that health experts say will boost memory and of course contribute to overall good health. There is of course the old adage, “you are what you eat” and “an apple a day keeps the doctor away” which certainly still holds true today Apples have also been linked to brain benefits.  In animal studies, eating apples has been shown to potentially decrease the risk of Alzheimer’s disease and to decrease age related mental decline.  These benefits are thought to possibly be because they boost the production of acetylcholine, a chemical that transmits messages between nerve cells. The quercetin in apples has been shown to protect brain cells from free radical damage.

Researchers believe that apple juice may prevent the decline of a neurotransmitter known as acetylcholine. Neurotransmitters are chemicals that transmit messages to other nerve cells and are crucial for good memory and good brain health. Past studies have shown that when acetylcholine is increased in the brain of people with Alzheimer’s mental decline can be slowed.

A new study shows that drinking apple juice could keep Alzheimer’s away and fight the effects of aging on the brain.

Extracts from apples, oranges and bananas were found to reduce the damage the illnesses due to neurons – nerve cells in the brain and spine.

Unpeeled apples have the highest quantity of the antioxidants, followed by bananas and oranges.

Research has shown that people who eat fruits and other high-fiber foods gain a certain amount of protection against Parkinson’s, a disease characterized by a breakdown of the brain’s dopamine-producing nerve cells. Scientists have linked this to the free radical-fighting power of the antioxidants contained therein.

Scientists from the American Association for Cancer Research, among others, agree that the consumption of flavonol-rich apples could help reduce the risk of developing pancreatic cancer. Researchers at Cornell University have identified several compounds – triterpenoids – in apple peel that have potent anti-growth activities against cancer cells in the liver, colon and breast. Their earlier research found that extracts from whole apples can reduce the number and size of mammary tumors in rats. Meanwhile, the National Cancer Institute in the U.S. has recommended a high fibre intake to reduce the risk of colorectal cancer.

Apples are among the fruits that have been linked to reducing one’s risk of diabetes.

Women who eat at least one apple a day are less likely to develop type 2 diabetes than those who don’t eat apples. Apples are loaded with soluble fibre, the key to blunting blood sugar swings.
A study published in the American Journal of Clinical Nutrition found that apples, as well as pears and blueberries, were linked with a lower risk of developing type 2 diabetes because of a class of antioxidants, anthocyanins, that are also responsible for red, purple and blue colors in fruits and veggies.

The soluble fibre found in apples binds with fats in the intestine, which translates into lower cholesterol levels and a healthier you.
One medium-sized apple contains about four grams of fiber. Some of that is in the form of pectin, a type of soluble fiber that has been linked to lower levels of LDL or “bad” cholesterol. That’s because it blocks absorption of cholesterol, according to WebMD, helping the body to use it rather than storing it.

An extensive body of research has linked high soluble fibre intake with a slower buildup of cholesterol-rich plaque in your arteries. The phenolic compound found in apple skins also prevents the cholesterol that gets into your system from solidifying on your artery walls. When plaque builds inside your arteries, it reduces blood flow to your heart, leading to coronary artery disease.

Gallstones form when there’s too much cholesterol in your bile for it to remain as a liquid, so it solidifies. They are particularly prevalent in the obese. To prevent gallstones, doctors recommend a diet high in fibre to help you control your weight and cholesterol levels.

Irritable bowel syndrome is characterized by constipation, diarrhea, and abdominal pain and bloating. To control these symptoms doctors recommend staying away from dairy and fatty foods while including a high intake of fibre in your diet.

Apple intake has been associated with weight loss in studies of overweight women who also follow a low-calorie or weight-reduction diet.Many health problems are associated with being overweight, among them heart disease, stroke, high blood pressure, type 2 diabetes and sleep apnea. To manage weight and improve overall health, doctors recommend a diet rich in fibre. Foods like apple high in fibre will fill up without costing too many calories.

Apples are rich in pectin (Pectin is a starch that occurs naturally in the cell walls of fruits and vegetables) the soluble fiber that helps remove toxins and cholesterol from the blood, which helps liver big time.They’re also rich in malic acid, a naturally cleansing nutrient that removes carcinogens and other toxins from the blood.  Apples are especially rich in malic acid, along with being one of the most antioxidant-rich apple varieties. All apples are great for the liver, however, but must choose organic apples since they’re one of the worst sources of pesticides in conventional form. One of the best – and easiest – things you can eat to help detoxify your liver is fruits – like apples.

Red apples contain an antioxidant called quercetin. Recent studies have found that quercetin can help boost and fortify your immune system, especially when you’re stressed out.

While they don’t quite rival oranges, apples are considered a good source of immune system-boosting vitamin C, with over 8 milligrams per medium-sized fruit, which amounts to roughly 14 percent of your daily recommended intake. 17 trapped in Chinese coal mine after carbon monoxide leak