Helicopter pilot Pete Gavitte peered through his night vision goggles late Sunday as he approached a fast-growing wildfire near the California wine country town of Napa and instantly knew there was trouble ahead.

As sirens blared from his helicopter, residents were grabbing their belongings and jumping into their cars to head down Atlas Peak Road, the only way out of the rural community.

But unbeknownst to those on the ground, flames would soon engulf the road, with downed trees and power poles blocking any exit. Over the next few days, the raging fires would kill at least 21 people and destroy 3,500 homes and businesses. Strong, dry winds are expected to fan new outbreaks in coming days.

Gavitte, 49, and his first officer and paramedic Whitney Lowe soon landed near a vineyard to begin what would become an extraordinary seven-hour rescue operation, conducted through the night by two helicopters in winds gusting up to 70 miles an hour (113 km per hour).

Lowe ran down a hill from the helicopter to begin corralling people, while Gavitte stayed at the helm. Those ultimately rescued ranged from a child to a 94-year-old woman that Lowe carried from car to helicopter, according to Lowe and Shaun Bouyea, a CHP air operations public information officer.

Some of those saved had just left their homes, while others were working in the area’s vineyards. Some were driving straight for the flames. Many at first resisted boarding the choppers and leaving everything behind, but were soon persuaded.

Within hours, the area known as Atlas was in flames, with homes and vineyards incinerated. But 42 people, five dogs and a cat were saved in the aerial rescue.

Bouyea said the helicopters made about 20 trips, which became slower and bumpier as conditions deteriorated. In one case, a husband parted with his son, wife and her parents when there was no room left on board, Lowe said. The helicopter saved the man on another trip.

Gavitte had to throw the belongings of the wife off the aircraft despite her insistence, because space and safety would not allow it.

Atlas, an unincorporated area in Napa County, was among the most devastated. A 30-minute drive from the posh shops of the wine country capital, the area is rural, lacks cell phone service and houses many who are elderly.

Even in the extreme conditions Sunday night, there were some Gavitte encountered who refused to be rescued. They said they had their own escape plans. Though it is possible the second helicopter evacuated them, Gavitte never learned their fate. 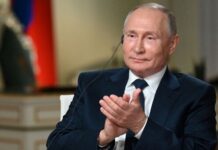 Putin on successor: Ready to support critic if he is true...

Maddison fires Leicester to victory over Spurs amid VAR drama

Families of Kashmir detainees in dark about where or why they...

Iran says it will destroy any aggressor