PARIS (Reuters) – Highlights of the 10th day at the French Open, the second Grand Slam tournament of the year, on Tuesday (all times GMT):

Roger Federer overcame Swiss compatriot Stan Wawrinka 7-6(4) 4-6 7-6(5) 6-4 to reach the last-four at Roland Garros for the eighth time, moving ahead of Henri Cochet on the all-time list for men’s singles semi-final appearances.

Holder Rafa Nadal returned after a rain delay to complete a thumping 6-1 6-1 6-3 win over Kei Nishikori to move into the semi-finals. The Spaniard hit 29 winners on his way to victory.

1535 PLAY INTERRUPTED DUE TO RAIN

Rain stopped play at Roland Garros with Roger Federer and Stan Wawrinka locked in a tight quarter-final battle on Court Suzanne Lenglen. Federer was up two sets to one with the score at 7-6(4) 4-6 7-6(5) 3-3.

In the other last-eight clash on Court Philippe Chatrier, holder Rafa Nadal was leading 6-1 6-1 4-2 against Japanese seventh seed Kei Nishikori.

Johanna Konta breezed past Sloane Stephens 6-1 6-4 on Court Philippe Chatrier to become the first British woman to reach the last-four at Roland Garros since Jo Durie in 1983.

Quarter-final action began under cloudy skies at Roland Garros with the temperature hovering around 24 degrees Celsius. Spells of rain were expected later in the day.

Malaysia’s monarchy to rule on pathway out of political turmoil 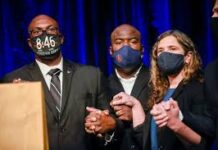 George Floyd’s family receives $27 million settlement from Minneapolis over his...

WHO hopes to have 500 million vaccine doses via COVAX scheme...