(Reuters) – Novak Djokovic’s U.S. Open title defence ended in agony on Sunday when the Serb retired from his fourth round match against Swiss Stan Wawrinka because of a shoulder injury.

Wawrinka converted his fourth break point to lead 6-4 7-5 2-1 when world number one Djokovic, who received treatment on his left shoulder after the second set, decided he could not continue.

“It’s never the way you want to finish a match. I’m really sorry for Novak,” said Wawrinka, who defeated the Serb in the 2016 final to lift the title.

“We’ve played amazing battles all of my career. I want to keep my level (from) tonight. I was playing super good tennis. I’m happy to be back.”

Wawrinka has reached the quarter-finals at Flushing Meadows for the fifth time in his last six appearances, and will next face Russian Daniil Medvedev.

Federer has steadily improved his level in the tournament as he continues chasing a 21st Grand Slam trophy. Against Goffin, the 38-year-old struck 35 winners and made only 17 unforced errors.

In the women’s draw, Serena Williams remained on track for a record-equalling 24th Grand Slam title despite needing treatment on her right ankle in a 6-3 6-4 win over Croatian Petra Martic.

American Williams rolled her ankle in the fifth game of the second set but recovered to set up a quarter-final clash against Wang Qiang of China.

Swiss Stan Wawrinka booked a spot in the quarter-finals after defending champion Novak Djokovic retired with a shoulder injury, trailing 6-4 7-5 2-1.

Wawrinka, the 2016 champion, will next face Russian Daniil Medvedev.

Keys hit seven aces, but made three times as many unforced errors as the Ukrainian, who will play Johanna Konta next.

Both players made a high number of unforced errors, with Medvedev (45) slightly better than Koepfer (51) on that count, but the Russian served 15 aces to his opponent’s two and will face Novak Djokovic or Stan Wawrinka in the quarter-finals.

Mike Bryan has been fined $10,000 for making a shooting gesture with his racket aimed at a line judge during a second- round doubles match on Saturday.

The 41-year-old American turned his racket upside down and pointed it at the judge after the official made a wrong call in the second set of his match against Roberto Carballes Baena and Federico Delbonis.

2000 SERENA TOO STRONG FOR MARTIC

Eighth seed Serena Williams fought through the pain of a twisted ankle which needed lengthy treatment to beat Petra Martic of Croatia 6-3 6-4 in the last 16.

The American former world number one scorched the court with 37 winners and will face China’s 18th seed Wang Qiang in the quarter-finals.

Dimitrov won 79% of his first-serve points and hit 31 winners to reach the U.S. Open last eight for the first time.

The 16th seed hit 45 winners, nine more than Pliskova, and won nine points at the net. She will face either Elina Svitolina or Madison Keys in the last eight.

Third seed Roger Federer was barely tested in his fourth- round match against David Goffin, beating the Belgian 6-2 6-2 6-0 at Arthur Ashe Stadium to advance in 79 minutes.

Wang claimed victory on her third match point after Barty had saved two on her own serve, but 39 unforced errors by the Australian, who did not convert a single break point, saw her make an earlier than expected exit in New York.

Play began on Sunday in cloudy conditions with the temperature hovering around 22 degrees Celsius (71.6°F) and a forecast high of 25C, with rain expected later in the day.

When oil became waste: a week of turmoil for crude, and... 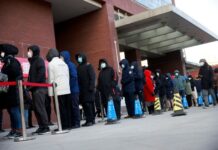 Chinese city of 11 million stops people leaving in bid to...