KATHMANDU 30 August – Houston officials will open two or three more mega-shelters to accommodate people who continue to arrive at the overflowing .

The mayor said the city has asked the Federal Emergency Management Agency for more supplies, including cots and food, for additional 10,000 people, which he hopes to get no later than Wednesday.

President Donald Trump visited Texas on Tuesday, and the White House said his stops in Corpus Christi and Austin were meant to highlight coordination at all levels of government and lay the groundwork for what is expected to be a lengthy recovery after the storm.

Trump traveled with the secretaries of health and human services and housing and urban development, and the head of the Small Business Administration.

The storm continued to take a toll even as the weather outlook improved slightly.

A weather station southeast of Houston reported 49.32 inches of rain as of Tuesday morning, according to the National Weather Service. That breaks the previous record of 48 inches set in 1978 in Medina, Texas, by Tropical Storm Amelia.

Although forecasters had feared that another 2 feet could fall in some places, it appeared that the outlook had improved somewhat on Tuesday. The weather service said the amount of rain falling in the Houston area would be 2 to 3 inches, perhaps a little less in Houston proper, as the storm moved east.

It is expected to make landfall again Wednesday morning, probably in southwestern Louisiana

Calls for rescue have so overwhelmed emergency teams that they have had little time to search for bodies. And officials acknowledge that fatalities from Harvey could soar once the floodwaters start to recede from one of America’s most sprawling metropolitan centers.

More than four days after the storm ravaged the Texas coastline as a Category 4 hurricane, authorities had confirmed only three deaths — including a woman killed Monday when heavy rains dislodged a large oak tree onto her trailer home in the small town of Porter. But unconfirmed reports of others missing or presumed dead were growing.

The disaster is unfolding on an epic scale, with the nation’s fourth-largest city mostly paralyzed by the storm that arrived as a Category 4 hurricane and then parked over the Gulf Coast. The Houston metro area covers about 10,000 square miles (25,900 square kilometers), an area slightly bigger than New Jersey.

Harvey kept drenching Houston and the surrounding area. Rain fell Tuesday at about half an inch (1 centimeter) per hour over Harris County — home to Houston — and up to 2 inches (5 centimeters) per hour to the east.

It could creep as far east as Mississippi by Thursday, meaning New Orleans, where Hurricane Katrina unleashed its full wrath in 2005, is in Harvey’s path. Foreboding images of Harvey lit up weather radar screens early Tuesday, the 12th anniversary of the day Katrina made landfall in Plaquemines Parish. 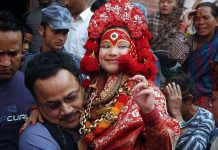