“The operation was carried out with a ballistic missile and 15 drones … targeting sensitive areas in the enemy’s capital of Riyadh,” said Houthi spokesman Yahya al-Saree, according to the rebels’ Al-Masirah TV channel.

“Our operations will continue and will expand as long as the aggression and seige on our country continues.”

A Saudi-led military coalition – which has been backing the Yemeni government against the rebels since 2015 – said yesterday it thwarted a Houthi ballistic missile that targeted Riyadh.

Fragments of the missile scattered over several Riyadh neighbourhoods, damaging at least one home but no casualties were reported, Saudi’s state-run Al-Ekhbariya television said.

Separately, the coalition said it had intercepted six Houthi drones targeting the kingdom, including the southern cities of Khamis Mushait and Jizan.

Saree on Sunday claimed those attacks as well, warning residents in the region to “stay clear from all military airports and sites”.

The Houthis have escalated attacks on the kingdom, while they step up an offensive to seize the Yemeni government’s last northern stronghold of Marib.

Years of bombings have failed to shake the rebels’ hold on Yemen’s capital Sanaa, and they have steadily expanded their reach in the country’s north.

Yemen’s grinding conflict has claimed tens of thousands of lives and displaced millions, according to international organisations, sparking what the UN calls the world’s worst humanitarian crisis. 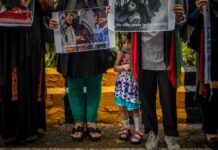