Huawei had sued CNEX in U.S. District Court in Sherman, Texas, for misappropriation of trade secrets involving a memory control technology and for poaching its employees. CNEX filed a counter suit, alleging Huawei sought to steal its technology by posing as a customer and calling the original claims part of a pattern by Huawei to obtain others’ secrets.


The United States has effectively banned its agencies from buying Huawei telecommunications equipment and barred U.S. companies from doing business with Huawei, claiming the firm represents a threat to national security.

Huawei has filed a suit to overturn the U.S. sales ban before the same Texas judge who heard the trade secrets suit.


The company is reviewing the decision and considering its next moves, said Tim Danks, a Huawei vice president for risk management.

The jury found that CNEX co-founder Yiren “Ronnie” Huang, who quit Huawei and co-founded CNEX days later, breached his employment contract requiring him to notify the company of any patents he obtained within a year of leaving the firm. However, it did not award Huawei damages.

Danks called the result a “mixed verdict,” noting the company “is disappointed that the jury awarded no damages after finding Mr. Huang breached his employment agreement.”

Huawei had sued CNEX and co-founder Huang in 2017 and was seeking at least $85.7 million in damages and rights to the San Jose, California, company’s memory-control technology.

“The things that Huawei claims are trade secrets are not,” CNEX attorney Deron Dacus said in court at the beginning of the trial earlier this month. He further described the lawsuit as “bullying and intimidation.”

The eight-person jury did not award CNEX any damages in its trade theft claims because it did not have any revenue, a CNEX spokesman said. Huawei’s suit was an effort to acquire “CNEX’s advanced semiconductor technology” through a court action, said CNEX spokesman Paul Sherer. 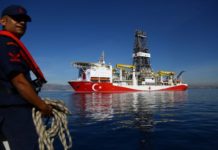 Turkish ship to drill for oil and gas in Mediterranean -minister