(Reuters) – Hurricane Michael was expected to strengthen on Tuesday in the Gulf of Mexico, taking aim at the Florida panhandle, where residents were implored to get out of harm’s way ahead of life-threatening waves, winds and rains.

Tens of thousands of people have been ordered to evacuate in Wakulla, Gulf and Bay counties. Michael could be a Category 3 storm when it makes landfall, which is expected on Wednesday, becoming the most powerful storm to strike the panhandle in at least a decade.

Michael was a Category 1 storm, with sustained winds of up to 90 miles per hour (150 kph), and gaining strength after it skirted Cuba’s western tip, the National Hurricane Center (NHC) said early on Tuesday.

Coastal storm surges of up to 12 feet (3.7 meters) are expected along the panhandle. As much as a foot (30 cm) of rain is forecast across Florida, Georgia and South Carolina, the centre reported.

The NHC warned that both could trigger deadly flooding and that residents within the hurricane warning zone should also “prepare for life-threatening winds.”

Florida Governor Rick Scott declared a state of emergency in 35 counties along the panhandle and Florida’s Big Bend regions. About 1,250 National Guard soldiers were aiding the process and more than 4,000 troops placed on standby, Scott tweeted.

State offices, schools and universities were to close on Tuesday through the end of the week in panhandle counties. Lines at gasoline stations were growing as people prepared to leave. Those who planned to stay emptied grocery store shelves of water and other supplies throughout the day on Monday.

Hurricane Michael would be the first major hurricane to hit the panhandle since Hurricane Dennis in 2005, which made landfall near Pensacola, according to hurricane centre data.

Torrential downpours and flash-flooding over the weekend caused 13 deaths in Central America after Michael formed off the coast of northern Honduras.

After striking Florida, Michael is forecast to move up the east coast on Wednesday and Thursday, ploughing through the Carolinas, still recovering from Hurricane Florence last month.

Energy companies halted nearly a fifth of Gulf of Mexico oil production and evacuated personnel from 10 platforms on Monday. 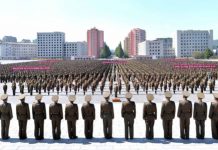 WHO says it will have advice on remdesivir in three to...