BEIJING: Chinese president Xi Jinping today said conflicts between states were “in no one’s interest”, adding Beijing and Washington should “shoulder” responsibility for world peace during a call with his US counterpart Joe Biden, Chinese state TV reported.

“Peace and security are the most valued treasures of the international community.”

Russia’s invasion of Ukraine is expected to have taken centre stage during the call between the leaders of the world’s two largest economies – their fourth since Biden was elected last year.

Biden has marshalled a resolute western alliance against Russia, spearheading a barrage of sanctions against Moscow while also providing military support to the Ukrainian resistance.

But China has refused to condemn its longtime ally Russia and has criticised sanctions as ineffective, augmenting fears that it may decide to give Moscow outright financial or military support.

“The international situation has undergone new and significant changes” since the duo’s last call in November, Xi said, according to CCTV.

“The theme of an era of peaceful development is facing severe challenges, and the world is neither very peaceful nor secure,” Xi said, adding the Ukraine crisis “is not something we want to see”.

China and the US should “shoulder our due international responsibilities, and put forth efforts for world peace and tranquillity”, he added. 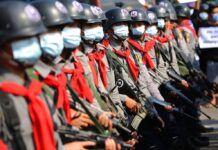