The capital of Zimbabwe finds itself caught between hope and uncertainty as it dawns on residents that after 37 tumultuous years Robert Mugabe may no longer be ruling the country.

The mood is a major shift considering that people here usually avoid discussing sensitive political matters in public, wary of attracting the attention of authorities with little tolerance for dissent.

But after the discontent of recent years, the military’s surprise takeover on Wednesday appeared to give a new impetus to free speech on the streets of Harare.

“If this comes to pass, we will regard this in the future as a ‘second Independence Day’, after that of April 18, 1980,” said Tineyi Chimwanda, who identified himself as a local businessman.

However, he has frequently faced accusations of political repression and economic mismanagement, and many Zimbabweans – especially the urban population – blame him for a long litany of woes, including rampant unemployment, widespread poverty and acute cash shortage.

In the early hours of Wednesday, the Zimbabwean army, which has previously been used as a way to suppress the opposition, placed the president under “house arrest”.

A broadcast by military spokesman Sibusiso Moyo, announcing the army’s seizure of power, was repeatedly aired on the Zimbabwe Broadcasting Corporation’s sole TV channel – for years a mouthpiece of Mugabe and his close associates.

Moyo’s speech was cheered by a group of restaurant customers during lunch time in central Harare.

The military denies it is staging a coup, saying its move is meant only to deal with “criminals” within Mugabe’s circles.

The president and his family, the army said, were “safe and sound”.

The statement, however, is being seen as a careful attempt by the military to keep a lid on potential unrest and ensure a bloodless transition from Mugabe’s rule.

The few who reported for duty on Wednesday followed the proceedings via the state TV channel from their workplaces and from bars.

“As a junior intelligence officer, I can tell you most us are pleased by this development,” said a member of the Central Intelligence Organisation, Zimbabwe’s dreaded spy agency.

“Only the senior guys, our bosses, who benefit from the oppressive system, will not be happy with this.”

The army’s intervention is believed to have been prompted by the sacking of Emmerson Mnangagwa, a war veteran, as vice president.

His dismissal came after months of a power struggle within Mugabe’s ruling ZANU-PF party over the issue of a successor.

On Monday, army commander Constantine Chiwenga gave warning that the military would not “hesitate to step in” if what he called the purge of former independence war fighters at ZANU-PF continued.

Mnangagwa, an ally of Chiwenga, leads a party faction that is at loggerheads with another led by Mugabe’s wife, Grace, and some younger members of the party.

Speculation is that Mnagangwa, who fled from Zimbabwe after his sacking, will return home to lead a transitional government following Wednesday’s events.

As the day wore on, residents of Harare could be heard discussing the sudden turn of events with excitement and anticipation.

Few, though, were ready to view the developments as “the end of Mugabe”.

“End of Mugabe? No, hard to believe. Too good to be true,” said Daniel Mkwananzi, an accountant.

“I feel the old man will fulfil his ambition of dying in office.” 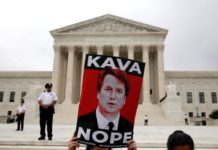 For Kavanaugh, a collegial start to U.S. Supreme Court career

Manchester United bounce back with 2-0 win at Bournemouth