Harris’ mother, who migrated to the United States to study, traces her roots to this non-descript hamlet in eastern Tamil Nadu.

“They have gone to the level of contesting for a vice-presidential candidate in America. Naturally, the villagers are very happy,” Ramanan, a trustee at a local temple, told Reuters Television.

Ramanan, who goes by only one name, said Harris’ maternal grandfather P V Gopalan, a former high-ranking Indian government official, donated funds to the temple when he visited.

On annual trips to India as a child, Kamala Harris would go for strolls with her maternal grandfather and his friends. In a speech in 2018, Senator Harris recalled those early visits to her grandparents in India.

“Kamala Harris — she is of Indian descent, she should win the election and also should be in favour of India,” said Ananthapadmanaba Sharma, a priest at the Ramanathaswamy temple.

“We will do all kinds of worship and the Lord will answer our prayers for her victory,” Sharma said. 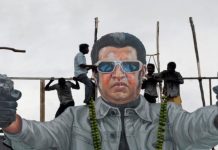