NEW DELHI: The approach of Earth Day this Friday is casting a spotlight on chronic, worsening air pollution in India’s capital — a deadly problem that continues to evade solutions as politics gets in the way.

New Delhi earned the dubious distinction of being ranked the world’s most polluted capital city for the fourth consecutive year in 2021, according to a report by Swiss air quality technology company IQAir.

The city of 30 million saw its concentrations of PM2.5 pollution — tiny airborne particles from cars, factories and other sources — jump to 96.4 micrograms per cubic metre, from 84 micrograms in 2020. Both figures are far above the World Health Organization’s recommended limit of 5 micrograms.

Overall, India ranked fifth among the most polluted countries.

According to the WHO, breathing in Delhi’s polluted air is equal to smoking 22 cigarettes a day.

“This year there has been a 20% increase in the number of people coming to us with respiratory problems, scratchy skin, stuffy nose, itchy throat and watery eyes due to pollution, pushing Delhi to the cusp of a health emergency,” said Dr Romesh Mittal at the Max Super Specialty Hospital in New Delhi.

One of the worst times of year is around Diwali, in the fall, when the air fills with smoke from burning firecrackers, despite a Supreme Court ban. The government routinely orders schools and colleges to close, while some families flee the capital to protect their children’s lungs. Residents with respiratory problems and seniors are advised to only go out in emergencies.

Last November, in a stopgap move to try to clear the air, the Commission for Air Quality Management ordered several large power plants and industrial facilities around Delhi to temporarily shut down, after the Supreme Court insisted immediate action needed to be taken to address soaring pollution levels.

Then there is crop burning, common across India, but especially intense on the rice farms near Delhi during winter months. Studies have shown that in the burning season, smoke is responsible for up to 45% of the city’s pollution.

“Political parties are wary of taking action against farmers as they form a large vote bank for them, a risk few can afford in the world’s largest democracy,” said Jagdish Thakkar, a former professor of agricultural sciences at Punjab University.

“Farmers do this (burning) because of a short window between the harvest and sowing of the next crop to get rid of the stubble, and also because it is the cheapest (method).”

Others say the nature of air as a “common resource” makes improving the situation harder.

“Air is shared by everybody and hence they all contribute to its pollution without facing any action from authorities,” explained Chetan Agarwal, senior fellow at the Centre for Ecology Development and Research, a non-profit.

“This also makes it difficult for a single organization or individual to maintain or monitor air unlike, say, a heritage monument or a public park, whose upkeep can be done in a more streamlined manner and also because its spoilage becomes immediately visible.”

In Agarwal’s view, air quality management requires a multipronged approach involving numerous stakeholders including ministries and environmental organisations. But in Delhi, he says, management is hamstrung by overlapping authorities and buck passing.

“The environmental norms are set by the Environment Ministry while diesel and petrol are under the Petroleum Ministry, while polluting vehicles are managed by yet another department. Multiple contributors to pollution have to be tackled in a coordinated way which is often not the case in Delhi,” he said.

Since such political issues are unlikely to by resolved anytime soon, some experts recommend focusing on realistic, tangible, climate-friendly steps.

Yet he complained that the Delhi government is investing in unscientific technologies like air scrubbers or gigantic smog towers that are backed by neither science nor common sense.

“No reputable scientists have come out in support of such technologies as efficient ways to curb pollution and no country in the world has managed to clean outdoor air with the help of giant purifiers,” he said. “In fact, environmentalists and scientists have publicly and consistently rejected such measures due to their inefficiency in reducing ambient pollution.”

Saldanha argued that the government needs to look at long-term initiatives that tackle the roots of the problem, rather than paying lip service to it.

This would include encouraging farmers to switch to growing multiple crops, rather than just one, which would also improve biodiversity and their incomes.

Farmers need to be educated about the benefits of mulching crop residues instead of burning — adding undecomposed plant material such as straw or hay to the soil, which protects the crops.

Experts also call for teaching citizens how to minimise their carbon footprints as well as penalising polluting industries heavily.

Until more action is taken, however, breathing in Delhi will remain akin to chain smoking.

Nepal Airlines Aircraft Slips Off The Runway In Nepalgunj 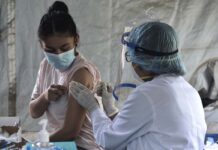 Students Above 18 Years And People Entering Nepal Through Border Points...