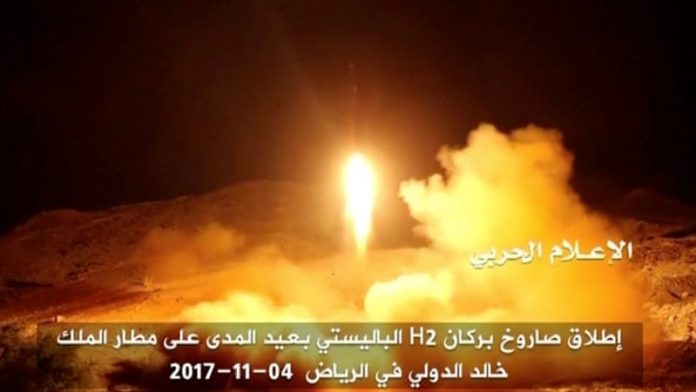 Iran has rejected accusations by a Saudi-led coalition fighting Houthi rebels in Yemen that it was involved in the firing of a missile that was intercepted north of Saudi Arabia’s capital, Riyadh.

In a statement on Monday, Bahram Qassemi, spokesperson for Iran’s foreign ministry, said the claim of Iranian responsibility for the missile launch late on Saturday, which was claimed by the Houthi rebels, was “malicious, irresponsible, destructive and provocative”.

“Yemeni response is an independent one and a result of Saudi Arabia’s aggression, one which is not carried out or provoked by any other country,” said Qassemi.

“The Saudis, who have failed to achieve their evil goals during long-term military aggression against Yemen, are making more problems for their defeated coalition with a clumsy psychological operation to make baseless and totally false accusations,” he added, before calling for talks between rival Yemeni factions to end the conflict.

Qassemi’s comments came shortly after Saudi Arabia condemned what it called a “flagrant military aggression by the Iranian-controlled Houthi militias” and claimed to have evidence of Iranian involvement in Saturday’s attack.
In a statement carried by the state news agency, Saudi officials labelled the attack a potential “act of war” and said: “Iran’s role and its direct command of its Houthi proxy in this matter constitutes a clear act of aggression.”
The country said it would close all Yemeni ground, air and sea ports while it carried out an investigation into how the missiles were smuggled through to Houthi rebels.

Saudi Arabia entered the conflict in Yemen in 2015 after the Houthi rebels took over the capital, Sanaa, and forced Yemeni President Abd-Rabbu Mansour Hadi to flee.

Together with a coalition of other Arab states, and with logistical support from the United States and other western powers, Saudi Arabia has pushed the Houthis from the southern port city of Aden, but has failed to dislodge the fighters from Sanaa and their northern strongholds.

Riyadh has long blamed Iran for arming the Houthis.

South Koreans may visit North again ahead of first summit in... Grab an app so you can keep your toilet trouble away

Western tourists trickle into Saudi Arabia as it tries to open...