GENEVA (Reuters) – The United States’ military presence in the Gulf used to be a serious threat but now it is an opportunity, a senior commander of Iran’s Revolutionary Guards said on Sunday, according to the Iranian Students’ News Agency (ISNA).

The U.S. military has sent forces, including an aircraft carrier and B-52 bombers, to the Middle East to counter what the Trump administration says are “clear indications” of threats from Iran to U.S. forces there.

The USS Abraham Lincoln is replacing another carrier rotated out of the Gulf last month.

“An aircraft carrier that has at least 40 to 50 planes on it and 6,000 forces gathered within it was a serious threat for us in the past but now…the threats have switched to opportunities,” Amirali Hajizadeh, head of the Guards’ aerospace division said.

Separately, the commander of the Guards said in a parliament session on Sunday that the United States has started a psychological war in the region, according to a parliamentary spokesman.

“Commander Salami, with attention to the situation in the region, presented an analysis that the Americans have started a psychological war because the comings and goings of their military is a normal matter,” the spokesman for the parliamentary leadership, Behrouz Nemati, said in a summary of the Guards’ commander’s comments, according to parliament’s ICANA news site. 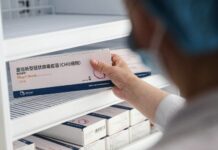 Iran has nothing to be concerned about- Supreme Leader