ROME/BEIJING: The Italian government on Friday (Jan 31) declared a six-month state of emergency in response to the first confirmed cases of the new coronavirus in the country.

The decision was announced in a statement after a cabinet meeting.


It came after Prime Minister Giuseppe Conte announced late Thursday that two Chinese tourists in Rome had been diagnosed with the deadly disease, adding that the situation was “absolutely under control.”

Declaring a state of emergency is a usual response in Italy to calamities such as earthquakes or public health crises. It allows public authorities to act more quickly and bypass red tape.


Authorities were checking potential contagion risks from the two Chinese tourists, but the Scientific Director of the Spallanzani, the Rome hospital treating the pair, said it was very unlikely.

“We are almost completely sure that there has been no further contagion,” Professor Giuseppe Ippolito, an epidemiology expert, told Radio Capital.

Italy has suspended all flights connections to China, and Conte said the country was the first in the European Union “to take such a precautionary measure.”

Even before the coronavirus cases were confirmed, there were multiple reports of discrimination, with Chinese people in Italy insulted in the street or Chinese restaurants boycotted.

On Thursday, more than 6,500 people were confined for hours in a cruise ship in Civitavecchia, a port near Rome, until a suspected coronavirus case was ruled out in the evening.

The Costa Smeralda boat was scheduled to head back out in to the sea later Friday.

In the morning, some 1,100 people got off it and about 1,200 got on, in a normal turnover between tourists at the end and at the start of their cruise holidays. 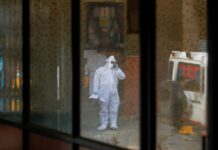