MILAN (Reuters) – Autostrade per l’Italia, the toll road operator which manages the bridge that collapsed in the Italian city of Genoa on Tuesday killing at least 20 people, said it would work with authorities to establish the causes of the disaster.

Autostrade, which is part of Italy’s Atlantia group , said its Genoa division staff had met with local authorities and was assessing how to rebuild the ‘Polcevera’ viaduct “in the quickest, most efficient and safest way.”

“Autostrade per l’Italia expresses its condolences for the victims of the Polcevera Viaduct collapse on the A10 motorway… and thanks rescuers for their extraordinary efforts,” the company said in a statement. 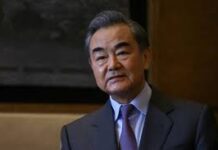