TOKYO: Japan and the US will hold joint military drills in Hokkaido this fall, with the two-week exercises expected to involve more than 4,000 personnel, Nikkei has learned.

The Resolute Dragon exercises between Japan’s Ground Self-Defence Force and the US Marine Corps will take place across September and October. The two sides look to make this the largest-ever bilateral drill involving US marines.

With Russia’s invasion of Ukraine and China’s military buildup, the alliance partners aim to heighten their preparedness for security threats in East Asia.

US forces in Japan do not have a command centre on the northern island of Hokkaido.

This year’s edition of Resolute Dragon, first held in December last year with roughly 4,000 participants, is seen as an important opportunity to assess defensive capabilities and operations there.

One of the goals of the exercises is to strengthen coordination with the US marines’ expeditionary advanced base operations, which entail setting up close to an enemy threat.

The drills also provide Japan and the US a chance to confirm procedures for handling the defence of remote islands.

The Russian military conducted drills on the Kuril Islands, north of Hokkaido, in March. The islands are held by Russia and claimed by Japan as the Northern Territories.

In response to the 2021 exercises, Russia’s foreign ministry said the drills presented a “serious challenge and a potential threat” to the country’s security.

Japan and the US have been conducting joint drills more frequently as security conditions in East Asia have eroded. Bilateral exercises were held 49 times in fiscal 2020, up 40% from the previous year, according to Japan’s defence white paper.

In the two months since Russia’s invasion of Ukraine on Feb 24, drills have taken place around 10 times, mainly involving Japan’s Maritime SDF.

The SDF has stepped up defence preparedness on Japan’s southwestern flank, including the Senkaku Islands in the East China Sea and the Nansei Islands that extend toward Taiwan.

Russia’s invasion of Ukraine has heightened Japan’s need to strengthen capabilities in the north, as well as ensure missile defences. 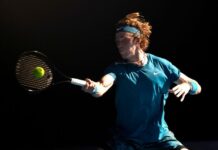 No excuses for Rublev after falling short again on Grand Slam...

Turkey says it will let refugees into Europe after troops killed...

Egypt’s President Abdel Fattah al-Sisi re-elected with 97.08 per cent of...