MELBOURNE (Reuters) – After failing to defend her Australian Open title, Sofia Kenin’s trip to Melbourne got even worse on Sunday when the American suffered a shock defeat by unranked local teenager Olivia Gadecki in the second round of the Phillip Island Trophy.

Three days earlier, Kenin had admitted to struggling under the pressure of defending her maiden Grand Slam title as she was beaten 6-3 6-2 by Estonian Kaia Kanepi on Margaret Court Arena.

Watched by world number one and fellow Queenslander Ash Barty, Gadecki saved two break points in the final game before serving out for the biggest win of her fledgling career.

“As soon as that match was finished, I was so happy that I even started crying,” Gadecki said. “I’ve never felt this way before either, so I’m still trying to process it.

“This win means that I’m not far, and I can really do this. I feel like I can really make this dream of mine a reality.” 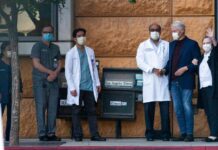 US House approves US$2,000 Covid aid checks sought by Trump