The 33rd-ranked Krejcikova saved five set points in the opening set and finished off Gauff, the 24th seed, on her sixth match point to set up a clash with reigning champion Iga Swiatek or Maria Sakkari for a spot in the final.

Krejcikova, who is also through to the last four of the women’s doubles with Katerina Siniakova, claimed her 10th successive win on the tour having arrived in Paris on the back of a maiden singles title in Strasbourg. 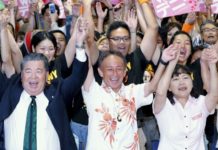 Over 400,000 advised to evacuate as storm bears down on Japan

What makes it possible to get Internet on a plane?