NEWCASTLE, England, (Reuters) – In a gripping title race, Liverpool showed they are ready to push Manchester City right until the final seconds of this season with their spirited 3-2 win at Newcastle United.

An 86th minute header from substitute Divock Origi secured the victory but in many ways it was also the willpower and guts of Juergen Klopp’s side that made sure of the three vital points.

The result leaves Liverpool with a two-point advantage over Manchester City but Pep Guardiola’s team have two games remaining, including Monday’s home match with Leicester City, while Liverpool have just one — their final game at home to Wolves.

No Premier League table has ever looked like this with a eight days of the season remaining — Liverpool have 94 points and City 92 — third place Tottenham are more than 20 points behind.

But Liverpool were not going to let this season, during which they have been beaten just once in the league, end at St. James’ Park against the club’s former manager Rafa Benitez.

“What the boys did is unbelievable,” said Klopp, who appeared moved by what he had witnessed.

Enough had gone against Liverpool this week that a little deflation could have been forgiven.

Liverpool started without injured Brazilian forward Roberto Firmino and then in the second half lost their talismanic Egyptian striker Mohamed Salah, who was carried off on a stretcher after an aerial clash with Newcastle keeper Martin Dubravka.

All this coming after the 3-0 loss to Barcelona in their Champions League semi-final, first-leg on Wednesday.

But instead of doubts, in place of surrender, came an eighth Premier League win in a row that keeps Klopp’s side right in the race and puts the pressure back on City.

The night began in relatively routine fashion — Virgil Van Dijk headed Liverpool in front in the 13th minute, after losing his marker and meeting Trent Alexander-Arnold’s corner with a thundering header.

Seven minutes later though Newcastle drew level with Salomon Rondon’s shot cleared off the line by the hand of Alexander-Arnold but before the referee had time to award a penalty — and surely punish the defender — Christian Atsu fired home the loose ball.

Newcastle were now full of belief and energy and when the lively Ayoze Perez rattled the Liverpool bar with a fierce drive, the momentum seemed to have shifted.

But this Liverpool side have a habit of turning the tide and they did so quickly.

Daniel Sturridge, starting in place of Firmino, back-heeled the ball from the corner to Alexander-Arnold and the full-back’s cross was expertly turned in by Salah.

Newcastle were in no mood to roll over though and nine minutes after the break they drew level when Liverpool failed to clear a corner and Rondon’s brilliant fierce left foot drive beat the helpless Alisson Becker to make it 2-2.

Then Salah was forced out and in his place was sent out Origi, the towering Belgian, who is no match for Salah’s invention but provides the kind of physical presence that can be so valuable when the game becomes a battle.

With four minutes of normal time remaining, Xherdan Shaqiri, who had been introduced at the break, whipped in a freekick from the right and Origi rose magnificently, his header flashing off Newcastle defender Jamaal Lascelles and into the net.

The Liverpool fans, perched so high up in the Leazes Stand, were delirious — they had felt the hope fade towards despair and suddenly the belief was back.

Newcastle warrant major credit for a combative display, when they had little to play for having already secured survival and while this was not the most complete of Liverpool performances, they showed the key qualities that are needed most when the pressure is high and the legs are tired.

Covid-19 strain in Beijing outbreak may have come from Southeast Asia:... 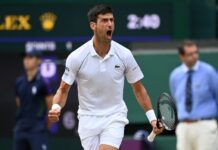 ﻿Explainer: What does failure of Trump-Kim summit mean for key players...