By Laxman Kafle
Kathmandu, July 2: Locusts are destroying crops in parts of a few districts in the country.
The locust swarms that first entered the country last Saturday have reached 26 districts across the country as of Wednesday, said, Ram Krishna Subedi, information officer of Plant Quarantine and Pest Management Centre under the Ministry of Agriculture and Livestock Development.
Subedi, who is leading the Locust Information Centre established at Plant Quarantine and Pest Management Centre, said that as per the reports received from the local and state levels, the locusts damaged crops mainly in four districts — Makwanpur, Dang, Pyuthan and Palpa — by Wednesday.
“We received information that the locusts have damaged crops, mostly maize and vegetables, in around 100 hectares of land in Makwanpurgadhi, Bakaiya and Bagmati of Makwanpur district,” he said.
Likewise, a slightly bigger group of locusts caused damages in some areas of Dang district. A swarm of locusts damaged rice and vegetables in Gadawa and Tulsipur areas of Dang district.
The concerned authorities have not yet reported the actual losses there, he said, adding that they requested the authorities to provide actual losses of crops by the locusts.
“There is still risk in Dang as large number of locusts are seen on the bank of the Rapti River. They can enter the crop field anytime. So, the technical team and the farmers are in alert state to control the possible damage there,” he told The Rising Nepal.
The locusts have damaged crops at Jhang area of Palpa, he said, adding that a large group of locusts landed there and caused the damage to crops.
“A technical team had reached there to control locusts by spraying deterrents. But they could not notice locusts there as the insects had already fled the area after remaining there for an hour,” he said.The locusts, however, have damaged corps significantly in Pyuthan, as a big swarm invaded the maize field.
“We have received reports from other districts that the locust swarms have caused minimal damage because of continuous rainfall.”
The locusts damaged crops slightly in a few areas in Chitwan, Kapilvastu, Rupandehi and Kailali districts.
Approximately about 200,000 locusts were also seen in the sky of Kathmandu on Tuesday evening. Some of them moved to Nuwakot while others stayed in Kathmandu.
He said that a small swarm was in the crop field only for one to two hours, so they did not cause significant damage to the crops.
“No new swarm of locusts has entered Nepal except for the one that entered on Saturday morning. But there is still a chance that other groups of locusts may arrive in Nepal,” he said.
All the local and state governments are in alert state by mobilising technical teams to control the possible losses the locusts can cause.
According to our Pokhara correspondent, locust swarms were seen in four districts of Gandaki State. According to Land Management, Agriculture and Cooperatives Ministry, the locust swarms have reached four districts of the State as of Wednesday.
Binod Hamal, senior crop officer at the Ministry, said that the locusts entered Gandaki State from the Terai via Kaligandaki Municipality of Syangja district.
Locusts were seen in Kaski, Lamjung, Nawalpur and Syangja districts as of Wednesday, he said. He said that no significant loss in agriculture was reported.
Stating that the continuous rainfall had prevented the damage, he said that they might destroy more crops if it stopped raining. He said that there were around one million locusts in the swarm noticed in the State.
According to him, the ministry has been collecting information from the technical teams mobilised at field levels to protect the possible losses from the locusts.
“A group of locusts slightly damaged crops at the Kaligandaki area,” he said.
He suggested farmers that they chase the locusts by producing noise beating drums and utensils. 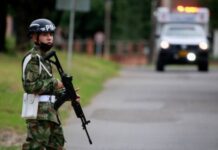