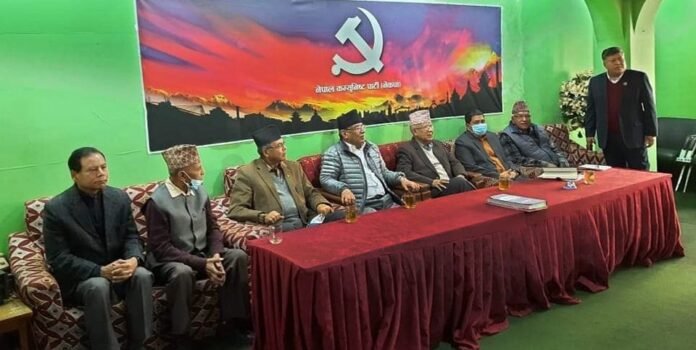 By A Staff Reporter
Kathmandu, Mar. 9: Leaders of the Prachanda-Nepal-led faction of the Nepal Communist Party on Monday decided to return to their previous parties—CPN-UML and Maoist (Centre).
Participating in the parliamentary party meeting of the faction in Perishdanda on Monday evening, they agreed to continue their struggle separately from within the party.
However, they showed their disagreement to the verdict of the Supreme Court regarding party unification. “The decision of the party unification was made correctly, however, the court has spoilt it,” they said.
Dev Gurung, a senior leader of the faction, said that the meeting concluded that the verdict of the Supreme Court was against the demand of the petitioner. “The court decided against party unification, which was not the issue raised in the writ but the name of the party,” he added.
According to him, the verdict appeared against the jurisdiction of the court which needs to be corrected. “The party meeting had decided to appeal against the verdict.
Gurung further said that the leaders would obey the verdict and return to their previous parties till the court corrects it. “No option is left except for obeying it,” he said.
He also said that only the name of ruling NCP was mentioned in the petition. “But the court has unfortunately divided the unified party into previous positions,” he said.
Leader Narayankaji Shrestha said that the verdict was incorrect, unnatural and inappropriate and the party seriously disagreed on it. “However, we will obey it to respect legal sovereignty,” he said after the meeting.
Shrestha said political and legal solutions will be sought soon. “Leaders are ready to struggle separately from within their party post as the court left no other options,” he said.