BROOKLYN: A massive manhunt was underway Tuesday in New York for a man who shot 10 people on a packed subway train, donning a gas mask before setting off a smoke bomb and opening fire on terrified commuters.

Police said the incident in Brooklyn was not being investigated as an act of terrorism, with no indication of a motive at this stage. None of the injuries were considered life-threatening.

“He then opened the canister that was in his bag and then the car filled with smoke. After that he began shooting,” Sewell said.

The city fire department said seven other people were wounded as panicked passengers fled the smoke-filled train, which pulled up to the platform moments after the shooting.

Police were alerted to the shooting just before 8.30am.

Verified video footage posted on social media showed the train pulling into the 36th Street station, and smoke billowing out the doors as passengers rushed off, some apparently injured.

One of them, Yav Montano, recounted on CNN being inside the car when it began filling with smoke — and shots rang out.

“In the moment, I did not think that it was a shooting because it sounded like fireworks,” he said. “It just sounded like a bunch of scattered popping.”

There were 40 to 50 passengers inside at the time and they began crowding towards the front, Montano said — but the door to the next car was locked.

“There were people in that other car that saw what was happening. And they tried to open the door, but they couldn’t,” he said.

CNN aired a brief video shot by Montano inside the car showing passengers crowded together, some wearing masks and others pressing clothing against their mouths to protect against the smoke.

“There were some people whose clothes, whose pants were covered in blood,” Montano said, adding that he could not tell who was injured. “All I know is I saw, like, a lot of blood.”

Once the train finally reached the platform, the doors opened.

“People filed out, people forgot bags and shoes, and they just left everything to just get out of there as soon as possible,” Montano said.

Eyewitness Sam Carmano, speaking to local radio station 1010 WINS, was on a subway train pulling in on the opposite side of the platform when the mayhem erupted.

“My subway door opened into just like calamity and then it was people, just running to get away from whatever was happening, and then it was smoke and blood and people screaming,” he said.

President Joe Biden, addressing the incident during a trip to Iowa, paid tribute to the first responders and civilians who “didn’t hesitate to help their fellow passengers”, and said his team was in close contact with New York officials.

“We’re not letting up until we find the perpetrator,” Biden vowed.

The NYPD has urged witnesses to contact a tip line with any information and New York governor Kathy Hochul promised regular updates as the investigation unfolds.

Mass casualty shootings happen with relative frequency in the US, where firearms are involved in approximately 40,000 deaths a year, including suicides, according to the Gun Violence Archive website.

Shootings in New York City have risen this year, and the uptick in violent gun crime has been a central focus for Mayor Eric Adams since he took office in January. Through April 3, shooting incidents rose to 296 from 260 during the same period last year, according to police statistics.

The incident came just a day after Biden announced new gun control measures, increasing restrictions on so-called “ghost guns”, the difficult-to-trace weapons that can be assembled at home.

Lax gun laws and a constitutionally guaranteed right to bear arms have repeatedly stymied attempts to clamp down on the number of weapons in circulation, despite a majority of Americans backing greater controls.

Three-quarters of all homicides in the US are committed with guns, and the number of pistols, revolvers and other firearms sold continues to rise. 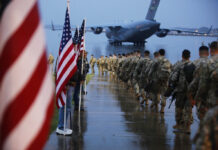 Afghanistan’s fate in the balance as US begins troop pullout Russia counting on China with nearly half its reserves frozen