Kathmandu, Aug. 4: The ongoing restriction order in Kathmandu district has been extended till August 11.
A meeting held in the presence of Senior Superintendent of Police of Kathmandu Metropolitan Police Range, Chief District Officer of Kathmandu Kali Prasad Parajuli and the government officials on Tuesday extended the restriction order.
The ongoing restriction order is going to expire from August 4 midnight. The new restriction order has prohibited mass rallies, protest, sit-in and mass gatherings and other functions like seminars that may cause crowd.
Party venues, dance bars and restaurants have been restricted from conducting mass gatherings and other programmes.
“Religious places, temples, schools, colleges, tuition centres, swimming pools and training centres were also restricted from conducting regular services,” according to the decision. Goods carrying vehicles have been restricted from plying from 9 pm to 11 pm and from 4 pm to 7 pm every day.
Similarly, online deliveries, fast food centres, take away services, and restaurants were given permission to provide service until 7 pm every day. In the context of public and private vehicles, no specific change was made in the previous decision.
Meanwhile, the District Administration Office, Kathmandu, has urged one and all not to engage in crowd generating activities such as meetings, conferences, sit-ins, processions and rallies.
Stating that the number of coronavirus infections and the risk of infection have started increasing, the DAO, Kathmandu on Tuesday issued a notice urging the denizens not to engage in any work that leads to a crowd.
Chief District Officer Kali Prasad Parajuli issued the notice stating that various gatherings, conferences, sit-ins, processions, seminars and rallies are being held even at a time when there was a high risk of coronavirus infection and urged everyone to take care of health standards as it could increase the infection rate and possible outbreak of the third wave of the virus.
CDO Parajuli has warned of taking strict action in accordance with the prevailing law if any activity is carried out by violating the restriction order and health standards.
Meanwhile, the Ministry of Health and Population (MoHP) on Tuesday confirmed 3,383 new cases of COVID-19, of which 2,448 were detected through PCR tests and 935 through antigen tests.
With this, the nationwide COVID-19 tally through PCR method reached 702,097, with 63,718 being antigen positive.

Of the total 16,718 tests conducted in the last 24 hours, 10,638 were Real-Time Polymerase Chain Reaction (RT-PCR) while 6,080 antigen tests, informed the MoHP.
According to the MoHP, Kathmandu Valley recorded 904 new infections in the past 24 hours.
Of these, 613 cases were confirmed in Kathmandu, 177 in Lalitpur and 114 in Bhaktapur, informed the MoHP.
In the past 24 hours, 543 new infections were recorded in Province 1; 54 in Province 2; 1,376 in Bagmati; 278 in Gandaki; 158 in Lumbini; 25 in Karnali and 14 in Sudurpaschim Province.
According to the data released by the MoHP, 14 districts including Morang, Jhapa, Sunsari, Kathmandu, Bhaktapur, Lalitpur, Chitwan, Makawanpur, have more than 500 active cases each and 19 other districts have more than 200 active cases each.
The active caseload was 32,059 on Tuesday. Of the active cases, 3,037 patients are admitted to various health facilities while remaining 29,022 are in home isolation.
As per the latest update, 686 COVID-19 patients are admitted to the Intensive Care Units (ICUs) and 162 are under treatment with ventilator support across the nation.
Meanwhile, 1,994 COVID-19 patients recovered from the infection in the last 24 hours. Nepal has now recorded 660,116 cases of recovery, and the recovery rate now stands at 94.1 per cent.
The country also reported 24 deaths related to the disease during the period, taking the total death toll to 9,922. The death rate now stands at 1.5 per cent.
According to the MoHP, 198,459 people were vaccinated in the past 24 hours. The total number vaccinated people in the country with the first dose of COVID-19 vaccine to date have reached 4,254,540. Of these, 2,002,703 have received the second dose as well. 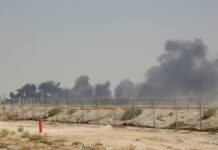 Fire breaks out at Riyadh oil refinery after drone attack by...

Asia-Pac airlines to record US$27.8b revenue loss due to Covid-19