MEXICO CITY (Reuters) – Mexico must significantly improve border infrastructure on its southern frontier with Guatemala to make a success of a deal struck last week with the United States to reduce migration, Mexico’s foreign minister Marcelo Ebrard said on Tuesday.

Speaking at a regular government news conference, Ebrard said not enough priority had been given to Mexico’s southern border in the past and that the state needs to have a stronger presence across the frontier to deal with migrant flows.

Mexico and the United States signed an agreement on Friday, with Mexico agreeing to take steps to control the flow of people from Central America, including deploying 6,000 members of a new national guard across its border with Guatemala.

The deal averted escalating import tariffs of 5% on Mexican goods, which U.S. President Donald Trump had vowed to impose unless Mexico did more to curb migration.

Taking questions alongside President Andres Manuel Lopez Obrador, Ebrard said Mexico was accelerating deployment of the national guard along the border with Guatemala and that migrants entering Mexico would all have to register with authorities.

To meet its commitments to Washington, Mexican migration facilities in the south need to be revamped, Ebrard added.

“There must be a different presence of the Mexican state in the south,” he told reporters, noting that the infrastructure along the southern frontier with Guatemala had for years been neglected while Mexico’s northern border was being modernized.

“You go to the south and the first thing you ask yourself is ‘right, where’s the border?’ There’s nothing. The idea is to make the south like the north as far as possible.”

Ebrard said there would need to be provisional installations built before rolling out a broader plan to cope with the flow of migrants arriving from Central America. “Because the reality is that a very big effort needs to be made,” he said.

Grand Launch Of VNY 2020 Features Light Of Unity, Firework And... 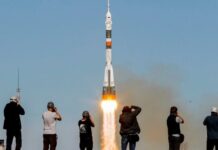 Moscow puts one of its Soyuz space modules up for sale