And yes, nuclear weapons would

Millions Could Perish: 5 Weapons India Would Use in a War Against Pakistan

Recently India alleged a series of ceasefire violations—in the form of automatic weapons fire—by Pakistan on the border between the two countries. According to India, it was the sixth attack in just five days. Such events are a reminder that tension remains high on the Indian subcontinent.

The nuclear arsenals of both sides—and the red lines that would trigger their use—have made conventional war much more risky to conduct. The 1999 Kargil War is considered the closest the world has come to a nuclear war since the Cuban Missile Crisis. If India were to use its superiority in ground forces to seize a sizable amount of Pakistani territory, Pakistan could respond with nuclear weapons.

It’s distinctly possible that any future war between India and Pakistan would involve limited action on the ground and full-scale fighting at sea and in the air. India has the upper hand in both, particularly at sea where it would have the ability to blockade Pakistani ports. Pakistan imports 83% of its gasoline consumption, and without sizable reserves the economy would feel the effects of war very quickly. An economic victory, not a purely military one might be the best way to decisively end a war without the use of nuclear weapons.

With that scenario in mind, let’s look at the five Indian weapons Pakistan would fear most in a war.

Commissioned in November 2013, INS Vikramaditya is the newer and more modern of India’s two aircraft carriers. In the event of war, Vikramaditya would lead an offensive at sea designed to sweep the Pakistani Navy from the field. The nightmare scenario for Pakistan would be Vikramaditya parked off the coast of Karachi, Pakistan’s largest port, enforcing a naval blockade.

Video: Tensions Rise Between Pakistan and India in Kashmir Region

Originally built for the Soviet Navy as the anti-submarine aviation cruiser Baku, Vikramaditya was mothballed in 1996 after it became clear post-Cold War Russia could not afford to operate her. The ship was purchased by India in 2004, to be upgraded by Russian shipbuilders to a true aircraft carrier complete with angled flight deck. The updated design deleted all cruiser armament, including two 100mm deck guns, 192 SA-N-9 surface to air missiles and 12 SS-N-12 Sandbox anti-ship missiles.

Vikramaditya is 282 meters long and displaces 44,000 tons, making it less than half the displacement of American supercarriers. Nevertheless Vikramaditya’s powerful air wing is capable of executing air superiority, anti-surface, anti-ship and anti-submarine warfare. The carrier air wing is expected to consist of 24 MiG-29K or Tejas multi-role fighters and 10 anti-submarine warfare helicopters. India has ordered 45 MiG-29Ks, with the first squadron, 303 “Black Panthers” Squadron, stood up in May 2013.

While INS Vikramaditya would be the visible symbol of a naval blockade, perhaps the real enforcers would be India’s force of 14 attack submarines. The most powerful of India’s submarines is INS Chakra, an Akula-II nuclear-powered attack submarine.

INS Chakra would be able to fulfill a variety of wartime tasks. It would be a real threat to Pakistan’s Navy, particularly her 11 frigates and eight submarines, only three of which are reasonably modern. Chakra is also capable of covertly laying mines in Pakistani waters and conduct surveillance in support of a blockade.

Construction of the submarine that would become Chakra began in 1993, but stalled due to lack of funding. In 2004 the Indian Navy agreed to fund the sub to completion—at a cost of $900 million—in exchange for a future 10 year lease with an option to buy. Delivery to the Indian Navy was supposed to take place in 2010, but transfer was delayed after a 2008 accident that killed 20 Russian Navy personnel and wounded another 21.

At 8,000 tons displacement, Chakra is as large as U.S. Virginia-class nuclear submarines. It has a maximum speed of 30 knots with a maximum operating depth of reportedly 520 meters. The sub not only has a customary large sonar hydrophone array on the bow, but also active and passive arrays scattered over the rest of the hull. Chakra also features a pod-mounted towed hydrophone array.

INS Chakra is armed with not only four standard diameter 533 torpedo tubes but also another four 650mm torpedo tubes. Armament includes the VA-111 Shkval supercavitating torpedo, a high speed torpedo capable of traveling at 220 knots to ranges of up 15 kilometers. Missile armament is in the form of 3M54 Klub anti-ship missiles. Chakra can carry up to 40 torpedo tube launched weapons, including mines. (Five merchant ships were struck by mines during the 1971 India-Pakistan War.) For defensive purposes, Chakra has six external tubes, each carrying two torpedo decoys.

According to the terms of the lease with Russia, Chakra cannot be equipped with nuclear weapons.

India’s recent agreement to purchase the AH-64D Apache helicopter represents a quantum leap in land firepower for the Indian Army. The Apache’s versatility means that it will be able to do everything from engage armored formations in a conventional war scenario to hunt guerrillas and infiltrators in a counterinsurgency campaign.

The Apache is one of the most battle proven attack helicopters fielded. Apache is capable of speeds of up to 171 miles an hour in high altitude environments, an important consideration in India’s mountainous terrain. The rotor blades are resistant to 12.7mm machine gun fire and the cockpit is protected from shrapnel by Kevlar shielding.

The Apache Longbow is optimized to attack and destroy armor—the mast-mounted millimeter-wave radar is capable of detecting and prioritizing up to 128 vehicle targets in a matter of seconds, then attacking up to sixteen targets in quick succession. For counterinsurgency operations, the thermal imaging sensor allows crew members to pick out individuals in ground cover and concealment.

The helicopter has four external hard points, each of which can mount four Hellfire missiles. A 30mm cannon capable of engaging light armor, soft targets or personnel is mounted underneath the helicopter chin and slaved to an optical sight worn by the pilot and gunner.

In a contract worth $1.4 billion dollars, in 2012 India agreed to purchase 22 Apache helicopters. Also included in the 2012 deal was a request for 812 Hellfire Longbow millimeter-wave radar guided missiles for use against tanks and armored vehicles and 542 Hellfires optimized for use against hard, soft and enclosed targets. Also included in the deal were 245 Stinger Block I missiles to provide an air-to-air capability.

In August, India offered to buy a further 39 Apaches, in an attempt to drive the overall unit cost down.

The Su-30MKI is an evolution of the 1980s-era Su-27 Flanker. Thrust vectoring control and canards make the plane highly maneuverable, while the Zhuk active electronically scanned array radar makes it capable of engaging several targets at once. Complementing the Zhuk will be the Novator long-range air to air missile, capable of engaging targets at up to 300 to 400 kilometers.

The Su-30MKI has an impressive twelve hardpoints for mounting weapons, sensors and fuel tanks. The Su-30MKI is arguably superior to any fighter in the Pakistani Air Force, with the possible exception of the F-16 Block 50/52, of which Pakistan has only 18.

A portion of the Su-30MKI force has been modified for the strategic reconnaissance role. Israeli-made sensor pods reportedly give the Indian Air Force the ability to look up to 300 kilometers into Pakistan (or China) simply by flying along the border.

The Su-30MKI will grow even more lethal with the addition of the air-launched version of the BrahMos supersonic missile, currently under development. Each Su-30MKI will be capable of carrying a single BrahMos. BrahMos will give the Su-30MKI stand-off capability against ships and ground targets to ranges of 295 kilometers.

India first tested a nuclear weapon in 1974, with the detonation of a 12 kiloton explosive device. The Indian government has been consistently tight-lipped on the status of their nuclear arsenal, and as a result a considerable amount of mystery surrounds India’s nuclear weapons.

The exact size of the arsenal is unknown but estimated to be between 90 and 110 nuclear devices. Statements by officials have lead outsiders to believe the maximum yield of Indian weapons to be around 200 kilotons, or approximately ten times the destructive power of the Hiroshima bomb.

India’s first nuclear delivery systems were likely attack aircraft—first the Jaguar, then the MiG-27 and Mirage 2000. Although capable, the aircraft were vulnerable to Pakistan’s air defense network and this vulnerability likely lead to the development of the land-based missiles. It is unknown whether nuclear weapons have been fitted to the Su-30MKI, but as a non-stealthly aircraft its ability to penetrate Pakistani defenses would not be dissimilar to a Mirage 2000.

Indian nuclear weapons are placed under the authority of the Strategic Forces Command. India’s primary delivery systems are land-based missiles. The Prithvi I and II liquid-fueled missiles have ranges from 150 to 350 kilometers and need half a day to prepare for launch. The Agni I, II, III and IV solid-fuel missiles are medium to intermediate range ballistic missiles with a range of 700 to 4,000 kilometers.

India is also on the verge of fielding its first ballistic missile submarine, the Arihant. Based on the Akula-I attack submarine design, Arihant has been modified to carry 12 K-15 short-range missiles or 4 K-4 intermediate-range nuclear missiles. Arihant is significant in that it will be able to patrol far beyond the range of Pakistani anti-submarine warfare capabilities. This will essentially make India’s retaliatory capability untouchable by Pakistan and thus a more credible deterrent.

India has a “no first use” policy regarding its nuclear weapons, reserving them solely for retaliation in the event of nuclear attack. Indian also adheres to a “minimum self defense” doctrine, in which the fewest nuclear weapons needed to maintain effective deterrence from attack are maintained.

Kyle Mizokami is a writer based in San Francisco who has appeared in The Diplomat, Foreign Policy, War is Boring and The Daily Beast. In 2009 he co founded the defense and security blog Japan Security Watch. You can follow him on Twitter: @KyleMizokami. 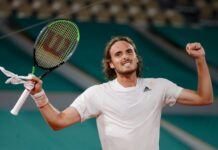 At least 29 killed, over 300 prisoners missing after IS besieges...