MOSCOW: Moscow mayor Sergei Sobyanin today announced a ‘non-working’ week in the Russian capital as cases in the city hit a six-month high amid a sluggish vaccination campaign.

“During the past week the situation with the spread of the coronavirus infections has sharply deteriorated,” Sobyanin said on his website today as the city registered 6,701 daily infections, the highest number since December last year.

Sobyanin added that “thousands” of hospital beds have been repurposed for coronavirus patients.

“We cannot not react to such a situation,” he said.

“To stop the growth of infections and to save people’s lives, today I signed a decree providing for non-working days between June 15-19,” Sobyanin said.

The order affects all employees in the Russian capital, a city of 12 million, except for essential workers.

Together with the weekends and a public holiday on June 14, most people working in Moscow will not return to offices until June 20, all the while retaining their salaries.

The mayor also announced the closure of food courts and playgrounds while restaurants, cafes and night clubs will be banned from serving customers between 11pm and 6am.

Sobyanin also called on employers to transfer at least 30% of non-vaccinated employees to working from home.

Cases in Moscow and across the country have been on the rise in recent weeks as Russia struggles to inoculate its citizens despite domestic vaccines being widely available to the public.

A spike in cases has also been reported in Russia’s second city St Petersburg that is co-hosting the Euro 2020 football championship.

Russia today registered 13,510 new coronavirus cases and 399 deaths, according to a government tally.

Egypt’s Sisi cruises to victory but with lower turnout 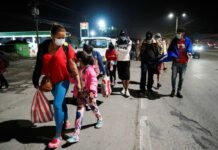