OSIRIS-REx mission is the first U.S. mission to retrieve a pristine sample of an asteroid and return it to Earth for further study, said NASA.

The spacecraft will descend to the asteroid’s surface for its “Touch-And-Go” maneuver, which will be managed by Lockheed Martin Space near Denver.

OSIRIS-REx, which is about the size of a 15-passenger van, is currently orbiting the asteroid Bennu 200 million miles from Earth.

Bennu contains material from the early solar system and may contain the molecular precursors to life and Earth’s oceans, according to NASA.

“The asteroid is about as tall as the Empire State Building and could potentially threaten Earth late in the next century, with a 1-in-2,700 chance of impacting our planet during one of its close approaches,” said NASA. 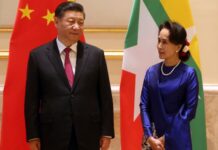 China calls for all sides to ‘resolve differences’ after Myanmar coup

Mugabe’s legacy: thousands killed in ‘rain that washes away the chaff’