Nasa is set to begin test flights of a revolutionary new “low-boom” supersonic plane that could clear the way for commercial flights taking passengers between New York and London in three hours.

The space agency will start flying the X-59 next year amid a push to find a replacement for Concorde, which was retired nearly two decades ago.

Supersonic travel has been banned over the continental United States since 1973 due to the disruption sonic booms cause to people on the ground.

https://s.yimg.com/rq/darla/4-6-0/html/r-sf-flx.html But Nasa, Congress, aviation regulators and private companies are now all working together to overcome the problem.

The X-59 is designed to reduce the shockwave caused by breaking the sound barrier.

It includes a very long and thin fuselage, pointed nose, and external elements placed on the top rather than bottom.

Designers have compared it to paper airplanes made by children.The sonic boom, which normally sounds like thunder or an explosion, will now be heard on the ground as a “gentle thump,” according to Nasa, and be no louder than someone speaking in a conversational voice.

The X-59 will be tested over selected US population areas, and local communities will be surveyed on their reaction.

Last month Nasa awarded a contract to a transport planning company to start the process of finding populated areas willing to be involved in the “community overflight testing” programme.

Specialist equipment will be used to provide what Nasa calls “real-time sonic-thump analysis”.

The US Federal Aviation Administration, the regulator which banned supersonic travel over land, has expressed a willingness to change its rules if the boom can be sufficiently reduced, and Nasa will be sharing test results with it.

The aircraft will fly at Mach 1.4, about 1,100mph, not quite as fast as Concorde, but twice as quick as traditional airliners. It will cruise at an altitude of 55,000ftMeanwhile, several private companies are developing potential successors to Concorde.

Boom Supersonic is working on the Overture, which would carry up to 88 passengers at speeds of Mach 2.2.

The company’s aim is to be flying the 100 per cent carbon neutral plane by 2026.

A trip from New York to London would be only three hours and 15 minutes.

Spike Aerospace is working on a low-boom business jet, the Spike S-512, which would fly at Mach 1.6 and carry up to 18 passengers.

“Every competitor is talking about low-boom,” said founder Vik Kachoria.

Aerion, another competitor in the race, which planned to build a supersonic business jet called the AS2, confirmed on Friday that it was ceasing operations.

It has been working on “boomless cruise” technology and was planning to make its planes in Florida.

The US military is closely following, and even investing in, the expected new generation of supersonic passenger jets.

In a recent report the Congressional Research Service, Congress’s think tank, suggested they could have military applications.

That could include being used to move commanders, diplomats, and even nuclear weapons quickly in time of war,

They could also be utilised to deploy small military teams to trouble spots, or in emergency humanitarian relief efforts. 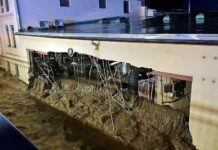 Several missing in Germany after houses collapse under heavy floods

﻿Around 35 tourists believed trapped after landslides in Indonesia’s Lombok –...