Kathmandu, Feb. 8: Most parts of the country received rainfall on Thursday while the high mountain regions received heavy snowfall.
According to the the Department of Hydrology and Meteorology, Jumla received the highest rainfall at 23.2 millimeters followed by Birendranagar that received 22.5 millimeters.
The Kathmandu Valley also received the rainfall from early Thursday morning. According to the Department of Hydrology and Meteorology, Kathmandu received 10.6 millimetres rainfall by Thursday evening.
The western part of the country received more rainfall than the eastern region. Biratnagar and Dhankuta in State 1 did not receive rainfall whereas Taplejung received one millimeter rainfall.
“Low atmospheric pressure developed in the western region of the country from Wednesday morning due to the westerly wind caused winter rainfall in many places from Thursday and it will last till Saturday,” meteorologist Rajudhar Pradhananga said.
He said that the country would also see light rainfall on Friday across the country, including the eastern region and the weather starts to clear from western part from Saturday.
“The Kathmandu Valley is likely to witness rainfall from Thursday to Saturday due to impact caused by the westerly wind’,” Pradhananga, Meteorologist at the Department of Hydrology and Meteorology, said.
The weather in the central and eastern regions will clear from Sunday, he said.
The same weather impact is likely to be seen up to the eastern region of the country on Saturday with chances of rainfall in the lower belt and snowfall in the high mountain regions, he said.
He said the main impact of the westerly wind would be seen on Thursday and Friday in the capital and other parts of the country with high chances of rainfall in the hills and heavy snowfall in high mountainous regions, Pradhananga said.
Meanwhile, our Humla correspondent Rajendra Raut wrote that an extreme cold was felt in Humla on Thursday as the mercury dropped to minus 11 degree Celsius in the district after it received heavy snowfall for the seventh time this year.
Owing to the heavy snowfall, the daily life of the people in the northern part of the district has been very difficult, said Madhav Prasad Dhungana, Chief District Officer of Humla. “More than one feet snow has already been deposited in the surface and the snowfall is still continuing,” he said.
He said that the presence of service renders was zero in the government offices on Thursday due to the heavy snowfall. In lack of continuous supply of electricity from Hildum Hydropower Project, the government officials were compelled to warm themselves by making fire to avoid the extreme cold, he added.
“The temperature has reduced to minus 11 degree Celsius during the day time, it is likely to go down further in night as the snowfall is still continuing,” Dhungana said.
Saroj Raut, a trader from Simikot, shared that they were also taking the help of fire making small groups to save them from the increasing cold.
As Simikot sees heavy snowfall with fogs from early morning, there is poor visibility even in day time and therefore the market area also remained closed today, he said.
There was still snow in the surface that deposited from the previous snowfall, now the surface of earth has been completely white due to the heavy snowfall today, he said.
Limi Rural Municipality which has just returned back into communication network after getting isolated from previous snowfall has now again gone out of contract from today’s snowfall.
Meanwhile, our Jumla Correspondent Netra Shahi said the district received snowfall for the fourth time from Wednesday mid-night. More than 2 feet snow was deposited in the surface in Jumla and temperature has dropped to minus.
The snowfall has brought happiness among farmers expecting positive impact of crops. The snowfall, however, has adversely affected normal life.
The roads were blocked and even an excavator used to clear the road got stranded due to heavy snowfall.
Meanwhile, in northern Bajhang, 23 sheep died in a landslide following the regular rains. The sheep Danu Bohora at Surma Rural Municipality died when the landslide buried the shed.
Locals said that the reason behind the landslide was the construction of road in the inclined plane above the sheep shed.
Shahi has 65 sheep, many of which he had bought recently at Rs. 400,000.

Rice balls for Japan hostage as he returns home from Syrian... 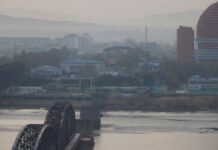 U.S., Japan and South Korea agree to keep up pressure on...