As the staff at the sanctuary feared that bird’s abusive behaviour would upset visitors, a worker volunteered to take him home. However, Rocco failed to stay out of trouble and instead befriended Alexa to help him out with his little tricks.

The grey parrot is so well versed with the virtual assistant that he uses it to chat, play music, tell him jokes and more, Indian Express the has published.

Not too long ago, a mischievous parrot had left netizens ROFL-ing after it refused to be rescued by a firefighter and, instead, verbally abused him. Yet again, another naughty parrot has hit international headlines, this time for placing multiple orders on Amazon. According to the DailyMail, an African Grey parrot, Rocco, has been caught placing orders with the help of Amazon’s voice-activated personal assistant Alexa.

When staff at the National Animal Welfare Trust sanctuary feared that the bird’s abusive behaviour would upset visitors, a worker Marion Wischnewski volunteered to take him to her home in Blewbury, Oxfordshire. However, Rocco failed to stay out of trouble for long and this time he had help from his ‘friend’ Alexa.

African Grey parrots are known for their ability to mimic words and it was not hard for Rocco to use his talent to order goodies from the e-commerce company. “I have to check the shopping list when I come in from work and cancel all the items he’s ordered,” Wischnewski told the news website.

Fortunately, due to the parental lock on Wischnewski’s Amazon account, Rocco’s attempted purchases have not been successful, the Sunday Times reported. However, ordering things is not the only thing that Rocco has learned. The grey parrot is so well versed with the virtual assistant that he uses it to make conversations, play music, tell him jokes and more. 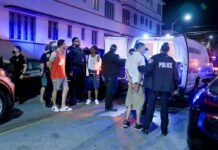 Monolith or just trash? Metal sculpture in Utah appears to have...