By Siraj Khan, Nepalgunj, Mar. 28: A Nepal Airlines aircraft slipped off the runway while landing at the Nepalgunj airport on Saturday.

According to Nepal Police, the plane flown from Kathmandu to Nepalgunj for carrying back throat swabs and other samples of the suspected coronavirus patient skidded some 80 meters away the runway at around 11:25 am.

Chief of Banke district police office, Superintendent of Police (SP) Bir Bahadur Oli, confirmed that the aircraft had gone out of the runway.

He said all of the five people on board including two doctors were unhurt.

SP Oli said a team of police rushed to the airport following the accident and rescued the crew and the passengers. 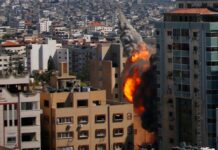