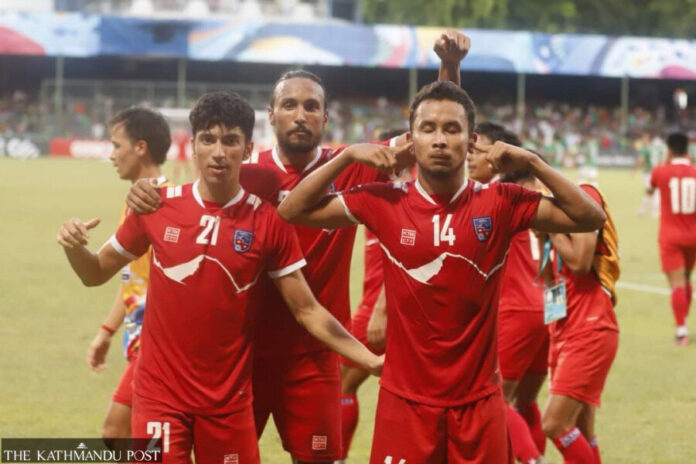 Nepal entered the SAFF Championship final for the first time after a fading moment penalty goal from winger Anjan Bista secured Nepal a 1-1 draw against Bangladesh in their last group stage match of the sub continental tournament at the National Football Stadium in Male on Wednesday.

Nepal, on the verge of crashing out of the group stage after conceding an early eighth minute goal, got a lifeline in the 88th minute after Bista was fouled inside the crowded area by the 10-man Bangladeshi team. Bista converted the resulting spotkick, giving Nepal a 1-1 draw which became sufficient for them to march into the final for the first time in 28 years.

It was the seventh international goal for Bista who was also on target against Sri Lanka.

The outcome assured Nepal top two finish after their last league match in the five-team contest with seven points. Nepal will meet either hosts Maldives or India in the final on Saturday. Nepal would get India as their final opponents if the South Asian giant beat hosts in the late fixture or else they would get Maldives.

Nepal, who have won their first two matches – 1-0 against hosts and defending champions Maldives and 3-2 against Sri Lanka, came into the match with the upper hand with six points in their kitty. While a draw would have secured Nepal’s place for the final, Bangladesh – fourth in the standings with four points—required a must win to earn a berth for the final.

Bangladesh made the breakthrough in the eighth minute when Suman Raza headed from the crowded area to send the ball beyond the reach of custodian Kiran Kumar Limbu.

They thought they had put one foot into the final before their first choice goalie Anisur Rahman was deservingly sent off in the 85th minute for handling the ball. He rushed out of the area and handed the ball in his effort to clear a back pass from his teammate before winger Bista, the last man chasing the ball, could beat him.

Playing under consistent pressure in the latter stage of the second half, Bangladeshi players fouled Bista inside the area before and were eventually knocked out from the contest.

Five teams are competing in the current edition of the game, unlike seven in the past as Bhutan and Pakistan did not participate in the tournament. The event being held in round-robin format sends top two finishers to the final.