By A Staff Reporter
Kathmandu, Jan. 8: Nepali Army that has been contributing to the national development aspirations of the government for years has constructed 30 road projects in different parts of the country, according to the Nepali Army Headquarters.
According to the Directorate of Public Relations and Information (DPR&I) at the Army Headquarters, the NA is still constructing five road projects which cover a length of 391.15 km in different parts of the country.
It said the army has been constructing 75.4 km road in Ridi-Maldhunga road section along the Kalingadi Corridor, 122.75 km in Kalikot-Humla section along the Karnali Corridor, 92 km Benighat-Arughat road section in Gorkha, 14 km out of 162 km Khandbari-Kimathanka road section in the east, and 87 km of Darchula-Tinkar road section.
The NA has been carrying out the responsibilities given by the state to construct different road projects since its establishment 258 years ago.
“The NA has so far successfully constructed 1,272 kilometres of roads in different parts of the country especially in the rural mountain regions which have difficult terrain,” Brigadier General and Nepali Army spokesperson Shantosh Ballave Poudyal said.He said the NA built 32 Bailey bridges of both single and double span measuring 1,400 metres in total length.
“The NA is contributing as a reliable institution to the decision and aspiration for national development of the government, and of late, the NA is committed to completing the national pride project of Kathmandu Terai/Madhes Fast Track in the stipulated date of the fiscal year 2080/81 BS,” Poudyal said.
He said that the NA was also given authority to get involved in other works including development, construction and disaster management works as per the Article 267 (4) of the Constitution.
“Under the same provision, the NA is currently undertaking the responsibility of Kathmandu Terai/Madhes Fast Track Project (KTFT), one of the national pride projects of the country,” he said.
In the past, the army had constructed various road projects, including Surkhet-Jumla, Nagma-Gamgadhi, Besisahar-Chame, Musikot-Burtibang, Baglung-Beni-Jomsom, Jomsom-Korala, Chhinchhu-Jajarkot, Salyan-Musikot, Abuwa-Bhachchek, and Gorkha-Arughat roads.
The army is now also taking up the responsibility of constructing a 4.41 km tunnel for KTFT project.

The NA completed the task of opening a 550-metre track along the Darchula-Tinkar road section (87 kilometres) in Ghantibagar to Chhangru of Darchula district on September 28, 2020.
On April 26, 2020, the government had entrusted the NA to open the track in Ghantibagar of Darchula.
On May 18, 2018, Deputy Prime Minister (also Defence Minister then) Ishwar Pokhrel inaugurated the 17-km Syaphrubensi-Mailung road section in Rasuwa district.
After the NA completed the project, a 90 km road from Galchhi of Dhading district to Syaphurbensi has now been shortened to 65 km. 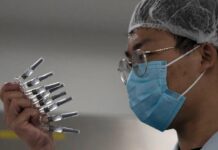 China’s Sinovac vaccine may be better than previously thought: It was...