Kathmandu, May 26 : The official logo of the Federal Parliament has been modified in accordance with the updated political and administrate map of Nepal. The new map which incorporates India-encroached Limpiyadhura, Lipulek and Kalapani in the far-western as its territories has been adjusted in the logo.
It may be noted that Business Advisory Committee of both the Houses in the Federal Parliament few days ago had decided to replace the old map with the revised one in the parliament’s logo and badge of lawmakers
With the publication of the new map, the government has already registered a constitution amendment proposal in the parliament to change the Coat-of-Arms featured in the Schedule-3 of the Nepal Constitution 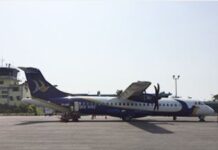 Buddha Air Flight With 73 Passengers Onboard Makes Normal Landing Despite...