With a nearly 300% spike in bookings compared to last year, Kaikoura, New Zealand, which landed on the world’s radar after being struck by a massive earthquake in 2016, tops Airbnb’s list of top trending destinations of 2019.

Airbnb’s annual best destinations list is based on a combination of booking, search and wishlist growth data and also aims to highlight under-the-radar regions, cities and towns.

Destinations include places that are recovering from natural disasters, a car-free island in southeastern China, and Normandy, France, which next year marks the 75th anniversary of the D-Day landings.

Here’s a look at the top trending destinations for 2019, based on Airbnb findings:

Kaikoura, New Zealand
This coastal town in the South Island has staged a strong comeback following the 7.8 magnitude earthquake in 2016. Transportation services are back online and services like whale and seal-watching have resumed. Year-over-year bookings in 2018 saw a 295% spike in growth, while searches also spiked 210%.

Xiamen, China
Described as a romantic port city, Xiamen is also home to Kulangsu, a pedestrian-only island located just off the coast, popular for seafood lovers. In 2018, the destination enjoyed booming popularity on Airbnb, with a 283% increase in bookings.

Normandy, France
Next year marks the 75th anniversary of the D-Day landings in Normandy. A two-hour train ride from Paris, the region is also home to the Route du Camembert, the trail named after France’s soft cheese. Bookings increased year-over-year 229%.

Great Smoky Mountains
With two of the park’s most iconic trails set to reopen following a wildfire that ripped through the park two years ago, America’s most visited national park is poised to become even busier. Year-over-year bookings in the area increased 191%, while searches also spiked 190%. 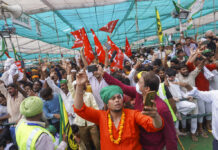 Indian farmers protest against farm laws in biggest rally as yet