WELLINGTON (Reuters) – New Zealand’s Prime Minister Jacinda Ardern will take her time to decide whether she will go alone or include coalition partners in her next government, after a thumping election win on Saturday.

Ardern delivered the biggest election victory for her centre-left Labour Party in half a century, which allows her to govern alone. It is the first time any party has had enough support to be a single-party government since New Zealand adopted a proportional voting system in 1996.

Labour won 64 of the 120 seats in the country’s unicameral parliament.

“The results demonstrate that we do have a clear mandate to lead,” Ardern told state broadcaster TVNZ.

“On the question of (government) arrangements … that’s something I want to take a little bit of time to consider and take stock of the results.”

Ardern was in a coalition with the Green Party and the nationalist New Zealand First party for the last three years.

The Greens returned with a bigger mandate of 7.6% this time but NZ First, led by deputy Prime Minister Winston Peters, did not gather enough support to return to parliament.

The Maori Party, representing the indigenous community which is about 15% of the population, made a comeback to parliament.

Although Ardern does not need support, coalitions are a norm in New Zealand as parties look to build consensus.

The resounding victory is a yes vote for Ardern’s progressive, liberal, democratic governance, and her deft leadership through a series of extraordinary events in her first three-year term including a massacre of 51 worshippers at two Christchurch mosques.

Ardern, 40, burnished her reputation this year with her “go hard, go early” approach to the coronavirus, which has resulted in the national elimination of COVID-19.

Ardern retains a solid international following with her promotion of issues including woman’s rights, social justice, and multilateralism.

Still, there has been criticism of her economic policies and a looming summer season with no international tourists will be a major test.

The election commission said voter turnout was estimated to be 82.5%, higher that a final 79.8% turnout in the 2017 polls.

Richardson says Suu Kyi living in a ‘bubble’, but is Myanmar’s... 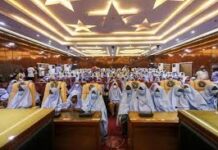 In break with past, UAE and Bahrain forge ties with Israel...