SEOUL (Reuters) – North Korea has released a film on leader Kim Jong Un’s second summit with U.S. President Donald Trump last week in which talks broke down over how to dismantle Pyongyang’s nuclear programme, but saw the two leaders engage in an amicable farewell.

The 78-minute documentary, which followed Kim’s 11-day train journey to Hanoi in Vietnam for the summit, was aired late Tuesday by North Korea’s state television.

It showed the highlights of Kim’s nine-day stay in the Vietnamese capital, including his exchanges with Trump, a visit to the North Korean embassy and a tour of tourism and industrial sites by his top aides.

Strictly controlled North Korean state media has made no mention of the summit breakdown or any disagreement, though Kim and Trump failed to narrow their gap over how far North Korea was willing to abandon its nuclear programme and the degree of U.S. willingness to ease sanctions.

At one point, Trump’s national security adviser John Bolton, whom Pyongyang’s state media previously slammed for making “reckless remarks” by comparing the country with Libya, was seen stone-faced during the summit, while Trump and other U.S. participants were all smiles.

The two countries “can overcome twists and turns and ordeals and go forward if both sides make fair proposals based on principles that are mutually accepted and respected, and engage in negotiations with the right attitude and willingness to resolve problems,” a presenter said.

Senior North Korean officials have accused the U.S. side of making “unreasonable demands” and warned Kim might “lose his willingness to pursue a deal.”

But the documentary’s brushing over the collapse and focus on the rapport between the two leaders signalled Pyongyang was not about to walk away from negotiations, experts say.

Trump has said that North Korea wanted the sanctions lifted in their entirety, while the North Korean officials said they had only demanded a partial easing in exchange for dismantling its main nuclear site at Yongbyon.

“The summit was an important change to bring the two countries’ relations to a new height based on the mutual respect and trust shared by the two leaders,” the presenter said. 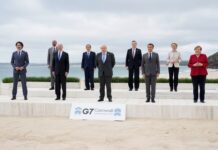 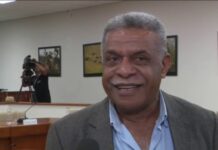