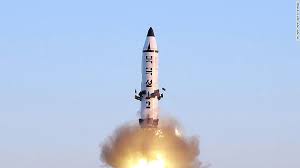 North Korea test-fired an unidentified ballistic missile that overflew Japan on Tuesday morning, broke up into three pieces and plunged into the Pacific Ocean about 1,180 km east of Hokkaido’s Cape Erimo, the Japanese government said.

The North launched the apparent intermediate-range missile, which traveled around 14 minutes, at 5:58 a.m., the government said, adding no damage had been reported to ships or aircraft. It said that the missile had broken into three pieces and fallen into the waters off Hokkaido.

In Washington, the Pentagon also confirmed the launch, saying it was working to analyze the firing.

The launch came as the Self-Defense Forces were practicing deploying anti-missile batteries at three U.S. bases in Japan. The U.S. military says the drills will test the ability of Japanese and U.S. forces to work together and assess firing locations at the bases. They will also allow Japan to practice rapid deployment of its PAC-3 anti-missile system.

Japan has in the past vowed to shoot down North Korean missiles or rockets that threaten to hit its territory, though experts and officials have said this could be both technically and legally difficult.

Tuesday’s launch also came amid the joint U.S.-South Korean Ulchi Freedom Guardian military exercises, which are due to wrap up Thursday. The North views the annual war games as a rehearsal for invasion, and has routinely threatened retaliation.

North Korea has been one of the Trump administration’s top foreign policy challenges, one that has taken on increased focus after it conducted two test-firings of its Hwasong-14 intercontinental ballistic missile (ICBM) last month.

Experts said the second launch saw the missile fly higher and longer than the first, and now puts a large chunk of the United States — including Chicago and Los Angeles — potentially within range of Pyongyang’s ever-improving weapons systems.

The White House has said that all options remain on the table, including military action, stoking concerns of a second Korean War that would devastate the region.

17 dead dolphins wash up on Mauritius beach near oil spill... 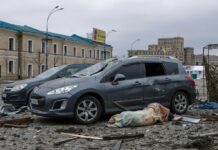 Half of Americans fault Trump for shutdown, despite his blaming Democrats...