SEOUL: Pyongyang accused the US of “double-dealing” today and held Washington’s duplicity responsible for stalled nuclear talks, days after both North and South Korea carried out missile launches.

Seoul successfully test-fired a submarine-launched ballistic missile on Wednesday, becoming only the seventh country in the world with the technology. Hours earlier, nuclear-armed North Korea had fired two missiles of its own into the sea.

Washington, Seoul’s treaty ally, condemned Pyongyang’s launch, saying it was “in violation of multiple UN Security Council resolutions and poses a threat to the DPRK’s neighbours” and other nations.

Washington’s “double-dealing act” is a “stumbling block in the way of solving the Korean peninsula issue and a catalyst straining the tension,” the KCNA commentary, attributed to international affairs analyst Kim Myong-chol, said.

“This is the exact reason behind the stalemate in the DPRK-US talks,” he added, using the North’s official name.

North Korea is under international sanctions for its nuclear weapons and ballistic missile programmes, which it says it needs to defend itself against a US invasion.

Nuclear talks with the US have been stalled since the collapse of a 2019 summit in Hanoi between North Korean leader Kim Jong-un and then-president Donald Trump over sanctions relief – and what Pyongyang would be willing to give up in return.

Washington has repeatedly stressed its willingness to use diplomacy with Pyongyang, with Sung Kim, the US special representative for North Korea, reiterating this week that the US has made multiple offers “to meet without preconditions.”

But Pyongyang’s Kim stressed “the word denuclearization can never be put on the table” unless Washington drops its “hostile policy” against the North. 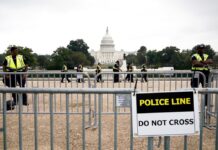 US Capitol on high alert as pro-Trump protesters converge