Pyongyang announced its first-ever Covid cases last week and has since reported nearly two million cases of “fever” and 63 deaths as the virus tears through its unvaccinated population.

State media reports do not specify how many of the cases and deaths have tested positive for Covid, but experts say the country’s crumbling health system would struggle to test and diagnose on this scale.

The outbreak was an admission that Pyongyang’s rigid two-year-long coronavirus blockade, maintained at great economic cost since the start of the pandemic, had failed.

Both South Korea issued a fresh offer of aid last week, but Pyongyang has yet to respond to Seoul’s offer, officials said.

Beijing — the last major economy to maintain a Zero Covid policy, which is battling its own nationwide outbreaks — also made a fresh offer of assistance to Pyongyang.

And, despite no official confirmation from either side, it appears North Korea took them up: sending three Air Koryo cargo planes to Shenyang to receive medical supplies, South Korea’s Yonhap News Agency reported this week.

The planes were Soviet-made IL-76 transport cargo planes capable of carrying 50 tons of freight, some of the largest planes the nuclear-armed state has, the report said.

The North chose the air route over the land “to speed up the transport of large freight”, Yonhap said, citing anonymous sources.

Other images show that the planes have been “moved to a remote part of Pyongyang airport” and indicate possible signs of “goods being offloaded from the planes and stored” likely to avoid contamination.

Representatives from Shenyang Airport and Air Koryo in Shanghai told AFP they had no information about flights from North Korea.

Since declaring a “maximum emergency” over the outbreak, the North has ramped up the production of medical supplies such as antipyretic drugs and thermometers, state media reported Thursday.

Thousands of tons of salt were sent to the capital city “under an emergency order” for disinfectant production, the official KCNA reported.

South Korea’s new President Yoon Suk-yeol, while hawkish on the North’s military provocations, promised he would “not hold back” on providing medical assistance if Pyongyang accepted.

But the North has not responded to his offers.

Experts have warned of a major health crisis in the North, which has one of the world’s worst health care systems. 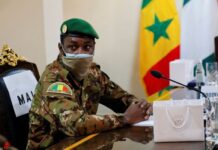