PYONGYANG (Reuters) – Packed into Pyongyang’s giant stadium this week with thousands of other tourists, Australian Mitchell Hamilton marvelled at the return of North Korea’s “Mass Games,” a huge pageant that has produced some of the most iconic images of the isolated country.

“My thought sitting there was that it was a show fit for a god,” Hamilton told Reuters on Tuesday atop the Juche Tower, a 560-foot (170-metre) obelisk in downtown Pyongyang. “You can’t help but get swept up in the spectacle.”

A sobering reminder of the power of the state in North Korea, however, was the realisation that many of the thousands of performers on the field were young children.

“What brought me back down to earth was when the kids ran out,” Hamilton said, leaning in to speak out of ear shot of the North Korean guides and minders who were accompanying both tourists and media. “It reminded me where I am.”

North Korea’s first Mass Games in five years has provided a chance for North Korean leader Kim Jong Un to raise foreign currency, at a time when tourism remains one of the few remaining reliable sources of income amid tough U.N. sanctions.

Since a reduction in tensions over North Korea’s nuclear weapons programme this year, tour operators say tourism has increased.

Exact numbers are not available, but tour operators say flights and accommodation in Pyongyang booked up so fast after the Mass Games were announced that North Korean authorities put holds on some tour groups from China.

Thousands of children participate in the performances, either as dancers or as one of the “human pixels” who use coloured flipbooks to form an ever-changing backdrop of images and slogans.

That practice has been criticized by rights groups as tantamount to forced child labour, and testimonies collected by defector groups describe harsh training regimes.

Past reports from Daily NK describe students taking bladder infection medicine due to the long hours of sitting required, while training in all weather for months.

Beyond the sanctions over its nuclear weapons programme, North Korea is an impoverished state, where some 40 percent of the population, or more than 10 million people, need humanitarian assistance and about 20 percent of children suffer from malnutrition, according to U.N. estimates.

Under Kim’s one-man rule, the country has also been accused of widespread human rights abuses, with a U.N. report last year estimating between 80,000 and 120,000 people are held in prison camps.

Still, the Mass Games performances, expected to run into early October, are a major drawcard for tourists, most of whom come from China.

“I think I’ve wanted it for like five years, or even more,” Tia Nousiainen from Finland told Reuters as she visited tourist sites in Pyongyang.

“Since I saw the first mass games on the TV or the internet, I wanted to see them by myself. And every year, I’ve been asking the travel agency if they are arranging them, and this year, I got the answer that ‘yes,’ they are arranging it.”

The show, however, dropped most of the typical anti-American themes, instead focusing on Kim Jong Un’s diplomatic engagement with international leaders.

Joel Goh, a visitor from Singapore, said the Mass Games made him want to see for himself the country behind so many of the headlines.

“It was a very special experience… I thought it was as good as any other show I’ve seen,” he said, adding that the scenes of Kim embracing South Korean President Moon Jae-in at their first summit in April were “quite moving.”

“We’ve come to realize it’s a bit different from what we hear outside,” Goh said of North Korea. “It’s an amazing place. I’m not regretting my trip at all.” 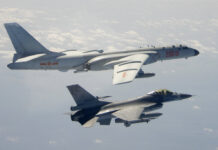