NEW YORK (Reuters) – World number one Naomi Osaka takes on 15-year-old Coco Gauff and temperamental Australian Nick Kyrgios returns to the court to meet rising Russian Andrey Rublev in the third round of the U.S. Open on Saturday.

Defending champion Osaka appears to have recovered from the knee injury that forced her out of the Cincinnati Open earlier this month and will look to reach the last 16 when she battles the surging American.

“I think it will be a really interesting match,” six-time U.S. Open champion Serena Williams, who is safely into the fourth round, told reporters on Friday.

“It’s super exciting tennis … I definitely think it’s the future of women’s tennis. And I’m really excited to just be a fan girl and kind of watch.”

Kyrgios, who mostly kept his cool during a routine second-round win on Thursday, will face a rested Rublev after the Russian played just one set before his opponent Gilles Simon retired.

Kyrgios, the 28th seed, is under investigation by the ATP Tour for critical comments he made about the organisation earlier this week.

He called the ATP “corrupt” for fining him $130,000 for losing his cool and lashing out at the chair umpire in Cincinnati earlier this month but later walked the comments back. 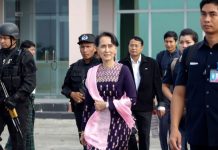 U.S. to sell 34 surveillance drones to allies in South China...