The house will begin a debate on the motion on Thursday and a vote is to be held within seven days.

“The prime minister ceases to hold his office after he has lost the confidence of this house,” opposition leader Shehbaz Sharif said, reading from the no-confidence motion telecast live on television.

The vote comes as Pakistan faces a recurring economic crisis, with Khan’s government banking on the International Monetary Fund to release the next tranche of a US$6 billion rescue package to shore up dwindling foreign currency reserves.

Khan, 69, a former captain of Pakistan’s national cricket team, lost a parliamentary majority with a series of defections from his party, and a united opposition is calling on him to step down. He has vowed to fight to stay put.

He has blamed a foreign-funded conspiracy for trying to topple his government. China is a long-time supporter and Pakistan, a traditional ally of the West, abstained from voting as the UN General Assembly overwhelmingly reprimanded Russia for invading Ukraine.

Nearly 20 of Khan’s lawmakers have defected and his main coalition partners have suggested that they might join the opposition, making him short of 172 votes, a simple majority needed in parliament to hold on to power.

The opposition says it commands 163 votes and can get more.

The government has sought a court intervention to bar the defectors from voting against the party under an anti-defection law.

The opposition and analysts say the prime minister has fallen out with the powerful military, which mostly determines who will rule, a charge both Khan and the military deny.

Hong Kong presses ahead with extradition bill despite biggest protest since... 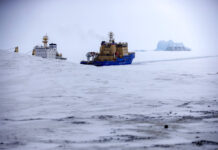 US, China, Russia plan Arctic research on fishing in step towards...