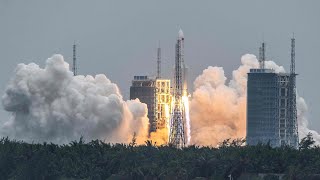 A Chinese rocket that successfully blasted off a building block for a space station is set to make an uncontrolled re-entry back to Earth, and its debris could crash into an inhabited area, according to reports.

While the module separated from the launcher to continue its journey as planned, the launch vehicle’s core section also reached orbit and is now slowly and unpredictably heading back to Earth.

In the coming days, it is expected to make one of the largest uncontrolled re-entries of a spacecraft as the Earth’s atmosphere drags it down, and could potentially land on an inhabited area, according to the US-based SpaceNews.

Spaceflight observer and astrophysicist at Harvard University Jonathan McDowell told SpaceNews that it was “unacceptable” to let the core section of the launcher re-enter uncontrolled.

“Since 1990 nothing over 10 tons has been deliberately left in orbit to re-enter uncontrolled,” he said.

The Long March 5B could re-enter at any point as far north as Beijing, Madrid and New York, and as far south as southern Chile and Wellington in New Zealand, SpaceNews reported.

However, it is most likely that any debris which survives the intense heat of re-entry will fall into the larger oceans – which account for around 70 per cent of the Earth – or areas where there are no people living, it added.

The Long March 5B’s first launch in May last year also ended with an uncontrolled re-entry, which was labelled as “really dangerous” by Nasa’s boss.

Debris from that 18-tonne core section passed over the US and landed in the Atlantic Ocean off West Africa, but had it entered 15-30 minutes earlier, debris not destroyed by the heat of reentry could have landed on US soil, according to Space News.

The largest and most famous incident was the 1979 reentry of Nasa’s 76-ton Skylab, whose uncontrolled reentry scattered debris across the Indian Ocean and Western Australia.

“This one is bigger than anything recent, but not as big as Skylab and its ilk back in the day,” tweeted Mr McDowell.

To summarize: this one is bigger than anything recent, but not as big as Skylab and its ilk back in the day.

The “Heavenly Harmony” module that the Long March 5B launched contains living quarters for crew members of China’s Tiangong space station, which the country says could be operational by the end of next year.

China has been barred by the US from participating in the bigger International Space Station, which has been in orbit for more than two decades and is also backed by Russia, Europe, Japan and Canada.

Zuckerberg called Trump after election to congratulate him: report