WARSAW: Poland today said it had expelled 45 Russian diplomats for espionage, an allegation immediately dismissed as baseless by Russia’s ambassador to Poland.

Interior minister Mariusz Kaminski made the announcement on Twitter.

“Poland has expelled 45 Russian spies pretending to be diplomats,” he wrote.

“We are dismantling the Russian special services network in our country.”

Russian ambassador to Poland Sergey Andreyev confirmed the expulsions, telling reporters that the individuals concerned had been given five days to leave Poland.

“There are no grounds for these kinds of accusations,” he said, adding that Russia reserved the right to take retaliatory measures.

Earlier today, Poland’s counter-espionage service ABW had announced that it had detained a Polish national suspected of espionage for Russia’s secret services.

“The activity of the suspect posed a threat to both (the) internal and external security of Poland,” he added. 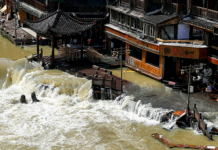 When oil became waste: a week of turmoil for crude, and...