(Reuters) – Severe thunderstorms were forecast across Southern U.S. states and the lower Mississippi River Valley on Wednesday with the possibility of high winds, hail and tornadoes, the National Weather Service said.

The storms marked the latest rough weather to descend on the South, where in late March five people were killed, dozens injured and entire neighborhoods wiped out in Northern Alabama by a string of powerful twisters.

“Strong to severe storms have developed along and ahead of the cold front from northern Missouri to east Texas,” the NWS Storm Prediction Center said in an alert posted to its website.

“Large hail, damaging winds and tornadoes remain the primary threat which is expected to continue through the afternoon and into the evening hours,” the center said.

All five of the people killed in March died in Ohatchee, a town of about 1,200 people in the northwestern corner of the Alabama where a tornado ripped apart homes and downed trees and power lines.

Three of the dead were family members, according to the county coroner. 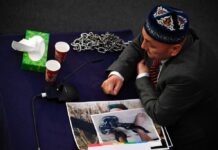